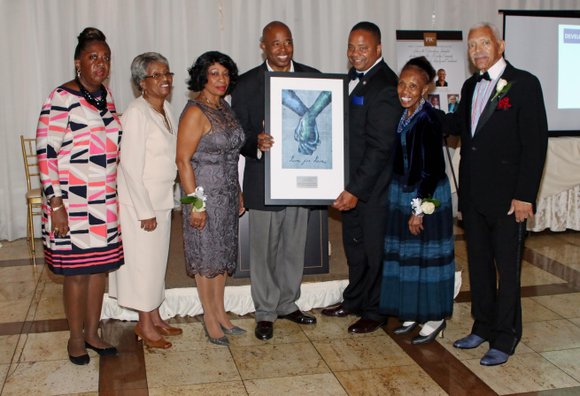 Board members with Borough President Eric Adams as he receives his award from state Sen. Jessie Hamilton and Essie Dugan, assisted by CEO William Green Photo by Lem Peterkin

Love is not dormant. It requires action and refuses to adhere to boundaries, and at their Love for Love: Community Unity to Heal Gala at the breathtaking El Caribe Country Club Caterers in Mill Basin, the Paul J. Cooper Center demonstrated such love Sept. 24.

Paul J. Cooper was a local community activist who advocated for improved mental health services for the community. The center was renamed in his honor after his death. It is located at 510 Gates Ave. in Bedford-Stuyvesant, and its mission is “to enable the disabled who are challenged by developmental disabilities, drugs and psychological disorders, to achieve self-sufficiency and independence.” This love has unfathomable depths. The center has served the Brooklyn community for over 40 years by engaging quality clinicians and staff to work with individuals in need of their numerous services.

Said CEO William E. Green, “Throughout the years, I have committed myself to bring change to the lives of people of color in the Brooklyn community because I have always known that this is what I have been brought here to do.” And that he has done well. Now, at the age of 82, he has announced his plan to retire.

Chairperson Mary R. Joyner said, “Paul J. Cooper Center started 44 years ago in a basement and it is still providing services,” adding how she was humbled by the center’s impact as they strive to give life to those who are lost.

The ceiling’s vine-like decor of miniature lights gave the appearance of a starlit sky, and under this cascade of love’s sparkling beauty, elected officials and community icons received recognition for their lifelong works. The Woman of the Year Award was presented to state Sen. Velmanette Montgomery, who said she was “honored to have such an esteemed group recognize her years of service,” and pledged her continued support. Borough President Eric Adams, recipient of the Shirley Chisolm Public Service Award, expressed how “we need to become more passionate and mindful when we deal with people who are going through pain.”

The Paul J. Cooper Inspiration award was presented to the family of the late Millicent Cranford, a PJC Board member for more than 20 years. She was also the director and manager and owner of Miles Funeral Home in Bed-Stuy. Her daughter Denise Cranford-Allen and granddaughter Dahnea accepted the award.

Through a sea of tears, Cranford-Allen said, “The recognition reminds me of how honorable some people are and to be celebrated after death means so much more to me. It is hard for me. I wish I could be more like her.”

The evening of “vision, fortitude and inspiration” ended with the musical entertainment of DJ N.O.