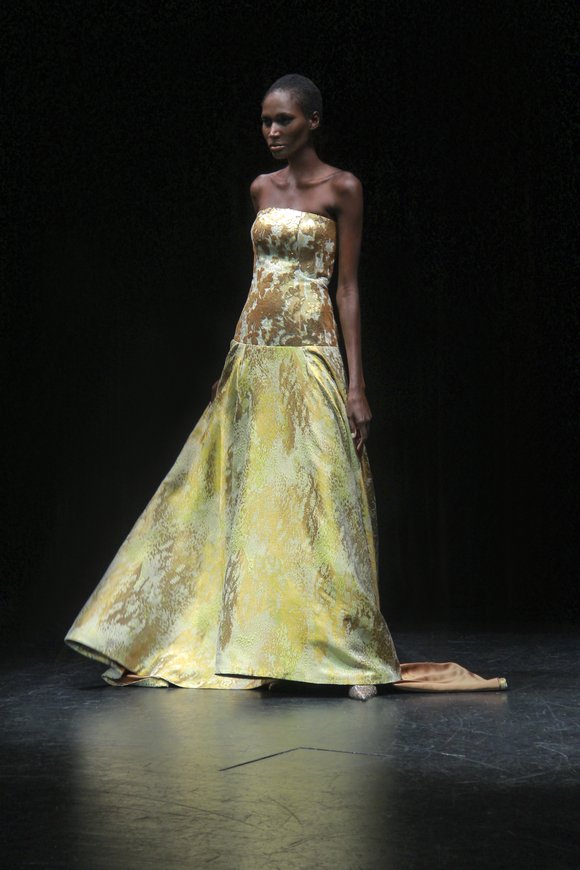 Spring 2016 collection by b Michael, presented at Harlem Stage.

Fashion is not new to Harlem. In fact, several designers come to Harlem for their style ideas. Even Yves Saint Laurent was known for getting some of his design ideas from Harlem streets. For b Micheal, though, presenting his spring-summer 2016 show at Harlem Stage, located on the City College of New York campus, was a matter of paying tribute to SonEdna, the nonprofit organization that empowers, celebrates and promotes the literary arts and writers of all genres. His show was also dedicated to the memory of the late E’dena Hines, relative of actor Morgan Freeman.

An American couturier and ready-to-wear designer, Michael is known for his amazing American collection at Macy’s. His clothes are timeless, elegant and glamorous, and they are made exclusively in America. His clothes are worn by many of the world’s most stylish women. At Harlem Stage, there were many celebrities present, including Valerie Simpson, Tamara Tunie, Flo Anthony, Audrey Bernard, Pamela Newkirk, Phylicia Rashad and Myrna Collins-Lee, founder of the SonEdna organization.

Michael’s show was pure theater and extremely intimate. Harlem Stage was the perfect setting for the designer’s spring 2016 collection. It was a nice blend of uptown and downtown glamour, which is fashionable in Harlem these days. Your personal style travels with you to anyplace, anytime. Often, his clothes were whimsical. Silhouettes were shapely and sharply presented to take you to dinner, the theater, ballet, a hip-hop club or jazz concert with a certain modern fit and flare .

Dresses were often nipped at the waist, yet there were many sheaths and frocks with empire waistlines. Other details included button fronts, open necks, shirt cuts, deep v-backs and sweeping swingy skirts. Color-blocking was evident. For evening, fabrics were exquisite. There was much appreciation for Michael’s opulent designs on models who were sashaying around the stage in cascades of Italian silk gabardine, Spanish lace and French silk cloque. In garden-like hues, Michael created his collection in shades of gardenia, midnight orchid, blue hydrangea and bronze spider mum. His hour-glass gown was stunning. There were ball gowns, too. The urban graffiti selections were a nice surprise. His menswear focused on sports jackets in chevron patterns. His men’s tuxedo looks were crisp.

New York Fashion Week at the historic Harlem Stage was exciting, and quite different. It just goes to show you that uptown offers many venues for the shows, just like downtown. The venue, a registered landmark, was once a water pumping station. Harlem Stage is a very interesting building in Harlem. Good Show!