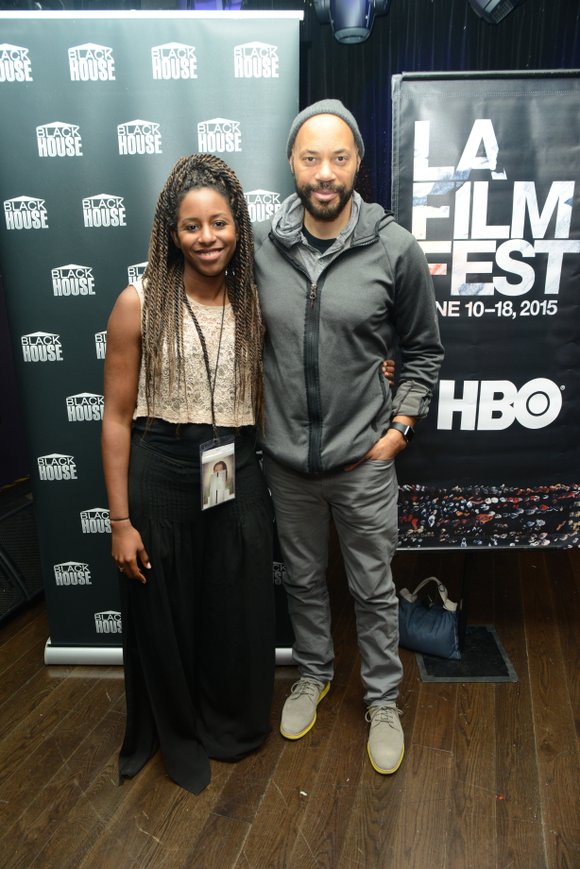 Mel and John Ridley at the LA Film Fest

Mel Jones’ official title is “Film Independent Manager Special Projects with the LA Film Festival.” That’s how I was introduced to her a few years ago. In our first exchange, her warmth caught me by surprise. That’s not typical Hollywood, I am sad to report.

I’m keeping my eye on indie producer Jones. Not because she’s learned her skills working with “the” Stephanie Allain. Not because she produced one of the best industry Q&As I’ve ever attended, at the 2015 Los Angeles Film Festival. It’s not even because she’s a new mom and newlywed and performing the balancing act of life like a carnival pro.

No. I’m keeping my eye on Jones because I know talent, and Mrs. Jones is talented. Here’s what she had to share about being a producer, a wife and mother and loving life.

AmNews: What is a producer?

Jones: A producer is the super glue of a production. She’s unseen but ever-present.

What did you learn on your first film that they didn’t teach you in film school?

I learned that sometimes running and gunning is the best and only way to do things. When working on a very low budget film like “French Dirty,” we had no time for complicated setups and long rehearsal periods or multiple takes. And we learned very quickly how to get in and get out. How to make split decisions and live with them. In film school, we had many luxuries that we couldn’t afford on our micro-budget indie film. The importance of prioritizing our needs is something I learned and think will serve me when working within any budget level.

How do you balance your life as a mother and wife in L.A. with the demands of producing films?

I have tons of support. A producer plays the mom and wife figure on a film. She takes care of everyone and everything. In order to take care of both families simultaneously, I delegate to the members of my village. I have tons of friends who will pick up the slack on either side for me. My sister picks up the baby if I have late meetings. My mom, who is retired, will fly out to set so that my daughter can be with me while I’m shooting. My husband learned how to cook! And he’s like my personal chef now. My friends who work in film read my scripts, proofread my notes—it’s all a community effort.

New media, what’s next? Is this a frontier that your creative team is looking at, and if so, what platform? Shorts? Series? Both?

I’m very interested in the new models being created by companies like Netflix, Hulu and Amazon, and we hope to be able to work in this ever-changing space. We’ve got a few projects on the horizon, and I’m very excited to create a niche for myself. I’m particularly interested in web series as a way to find new talent and to test ideas.

Share the best advice you received, from whom and where and why.

What’s the best advice you can give to someone, of any age, who wants to make a transition to film with a producer’s end goal?

Name three rising stars in the industry (in front of the camera or behind).