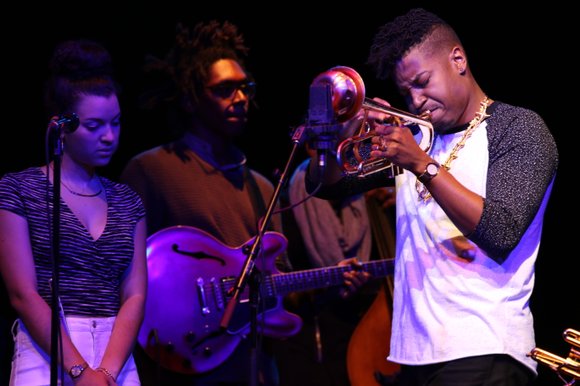 The 1960s were heavily colored with shaded overtones of rebellious youth implementing revolutionary tactics against an indifferent government that always seemed to have a smirk of supremacy. In an effort to bring civil and human rights to the forefront of this revolution, the Young Lords, with founder Jose Cha Cha Jimenez, reorganized to become the Young Lords Party in the fall of 1960. Their sense of urgency at the time was Chicago Mayor Richard Daley’s urban renewal plan, which was displacing Puerto Ricans from prime real estate areas such as Lakeview and Lincoln Park.

“¡Presente! The Young Lords in New York” is now on exhibit at Loisaida through Oct. 10 at 710 E. Ninth St. and Avenue C, the Bronx Museum of the Arts through Oct. 18 at 1040 Grand Concourse and El Museo del Barrio through Oct. 17 at 1230 Fifth Ave. and 104th St. The institutions partnering in “¡Presente!” are all located in neighborhoods where the Young Lords were most active, and each exhibition reflects on their activities in that part of the city. It explores the Young Lord’s cultural impact in New York and the U.S.

“The Young Lords had a defining influence on social activism, art and politics, but the lasting significance of their achievements has rarely been examined,” said Bronx Museum Executive Director Holly Block.

The issues the Young Lords struggled with are still timely, and their aesthetic and cultural vision still inspires both artists and community leaders today. The Young Lords instituted community programs similar to the Black Panthers, such as free breakfast for children, community testing for lead poisoning and free clothing drives. From a Puerto Rican ideology, they organized cultural events, Puerto Rican history classes and marches calling for Puerto Rican independence.

On the Lower East Side, the Young Lords sparked a brand of cultural activism and recast themselves as actors and agents of institutional change in combating self-hatred and shame of their cultural heritage. They redefined neighborhood spaces, engaged in art-based community making, created community-development and cultural centers.

“We were sharing the art, doing things together. Everyone came together, poets, musicians [jazz and salsa]. We were pro-Fidel Castro and Puerto Rico,” said Jerry Gonzalez, musician and leader of the Fort Apache Band. He was also actively involved in the New Rican Village, performing at fundraisers and adding his voice to the cause.

Loisaida stems from the Young Lord’s creative drive. The New Rican Village Cultural Arts Center was founded by in 1976 by Eddie Figueroa, a former Young Lord. The Young Lords headquarters were located at 256 E. Third St., next to the Nuyorican Poets Cafe.

“The Lower East Side Young Lords exhibit preserves the spirit of this community and captures a moment of history,” said historian Pepe Flores. “We hope it encourages young people to continue this spirit and carry on this history.”

For a complete listing of time schedules, contact the specific venue.

Last week’s storm that timidly hit Gotham didn’t stop the fans of Christian Scott aTunde Adjuah from attending his performance at Harlem Stage. The young trumpeter and composer has navigated his own path in this jazz world. While small groups from trios to quintets have basically become the rule, Scott maintains an eight-musician ensemble.

He has taken the various formed terms of jazz and replaced it with his concept “stretch music.” “I don’t think music should be separated, it’s all about culture,” said Scott. “Race and genres are social constructs made to set differences. We try to apply as many genres as possible into our music, like salsa, West African, classical, blues and rock. It sounds so beautiful when they are in tune with each other the way the environment should be.”

Like Art Blakey and Miles Davis, Scott, at 32 years of age, has a keen eye for serious talent. His ensemble includes some of the best young musicians on the scene, including alto saxophonist Braxton Cook, drummer and Pan-African drum kit Joe Dyson, Lawrence Fields on piano, rhodes and keyboards, Cory Fonville on drums/SPD-S, the bassist Kris Funn, the guitarist Dominic Minix (only 18), flautist Elena Pinderhughes (still attending Manhattan School of Music) and the vibraphonist Warren Wolf.

They opened the show up with the loud “Twin,” a hardcore swing sparking the sounds of Cuba to Scott’s hometown of New Orleans with West African rhythms. “I use two drums to give us that West African sound. The concept of big bass drums came from Africa,” said Scott. “I try to show the relationship between the older drums and the new drums.”

Dyson’s Pan-African drum kit includes the djembe, mondo snare and the dundun (three drums of various sizes). Fonville performs on an SPD electronic drum machine to give that upbeat that guys such as Pharrell and Timbaland use. “It’s hard to hold on to your culture when you are not exposed,” says Scott. “People need to be aware.”

He closed the show with “Klu Klux Police Department,” named after a scary experience he had with New Orleans police officers on a lonely road on his way home from a gig. Roaring loud rhythms hovered as Minix’s guitar brought out glimpses of Jimi Hendrix.

His latest CD, “Stretch Music” (Ropeadope Records), enlists his core group, with Pinderhughes as the featured artist on “Liberation Over Gangsterism.” Her notes fly like varied birds in the sky chattering over what can be. The album finds Scott in a more subdued swing mode with muted trumpet (beautiful notes filled with thoughts of aspirations) and hip-swinging flurries by saxophonist Braxton. There are 11 tracks with eight originals by Scott, and offerings by Funn and Fields. “Stretch Music” provides new arrangements for a new day.