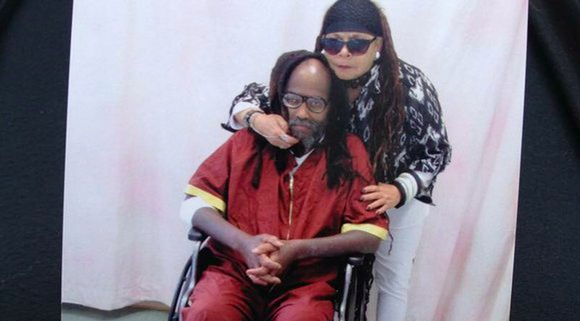 Mumia Abu-Jamal and his wife Adiya

More than 40 health care providers have signed and delivered an appeal to Pennsylvania state officials, including Gov. Tom Wolf, requesting proper care for Mumia Abu-Jamal and thousands of other inmates infected with hepatitis C.

According to the appeal, hepatitis C, “if left untreated, can lead to diabetes, heart disease, liver failure and even death.” They contend that what happens behind the prison walls has an impact on the broader population. “A 1997 study,” the appeal stated, “estimated that 29 to 43 percent of all people infected with HCV passes through a correctional facility. Called a ‘silent epidemic,’ hepatitis C has a disproportional impact on impoverished communities and people of color.”

Abu-Jamal, who has been in prison since 1982 is perhaps the most renowned of the political prisoners infected with the disease. Advocates for his release charge that he was wrongfully incarcerated, placed in solitary confinement on death row for 30 years and is now facing a life-threatening medical crisis, after a failure to diagnose the disease and provide him with proper care.

Like the appeal, the call for his immediate release has come from an international coterie of petitioners, even as reports that the Pennsylvania Department of Corrections and the state’s Department of Health are working on a protocol for treating the infected prisoners.

Dr. Joseph Harris, a signer and expert on HIV and HCV who has examined Abu-Jamal’s medical records, stated, “It is not rocket science to understand that Pennsylvania prisons represent a very important place for treatment of these diseases to start as part of public health policy.”

One of the problems facing those afflicted is the exorbitant price of the drugs for hepatitis C. For example, Sovaldi, a new therapy of choice in treating people infected with the disease, cost $1,000 per pill. A full course of treatment is priced at $84,000, which means it is prohibitively expensive and clearly unavailable for those behind bars.

“Denying medicines and proper medical treatments to prisoners is inhumane,” said Suzanne Ross, a clinical psychologist and a longtime campaigner for Abu-Jamal’s release. “It is the illegal imposition of punishment, humiliation and torture on prisoners. For Abu-Jamal and other prisoners infected with hep C, it is a death penalty by medical neglect.”