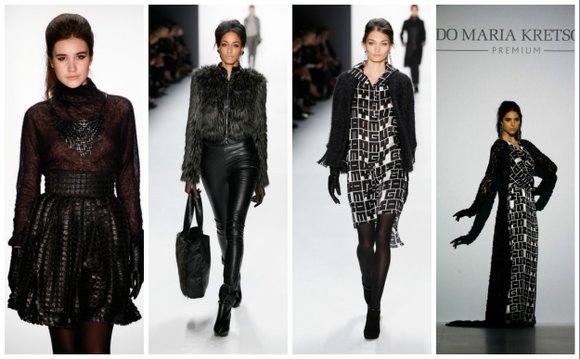 Called the German Valentino, designer Guido Maris Kretchmer’s fall-winter designs showed his passion for design and fabric. From an early age, his fashion career blossomed when he received his first sewing machine. Within a short amount of time, Kretschner became one of the most successful designers in Germany. His looks are unique, exciting and stylish.

His versatility is reflected in both of his collections. For his premium line, he designs high-quality cocktail dresses and glamorous evening gowns. The Guido Maria Kretshmer collection focuses mainly on ready-to-wear looks and business looks. His clothes are worn by such stars as Charlize Theron, Christine Neubauer and Alexandra Maria Lara. Several models trust his fashion expertise, and they love to wear his clothes on the red carpet.

The designer has also published two bestselling books, and his designs were spotlighted in a documentary that aired on the German TV channel VOX.

Another designer to watch, Hernan Lander showed a great fashion collection at the European shows. With an innate desire to push boundaries, Lander employs visions of modern art and innovative forms of architecture in his collection. His journey began in the Dominican Republic at Altos de Chavon. His contemporary designs were extremely elegant.

Paul Nathapol’s collection was inspired by the 1950s philosophy movement and existentialism, where one’s freedom to express the individual experience is explored. His designs emphasized the uniqueness and isolation of these experiences and how they play such an important role in one’s existence.