Schumer and Booker team up for sentencing reform bill 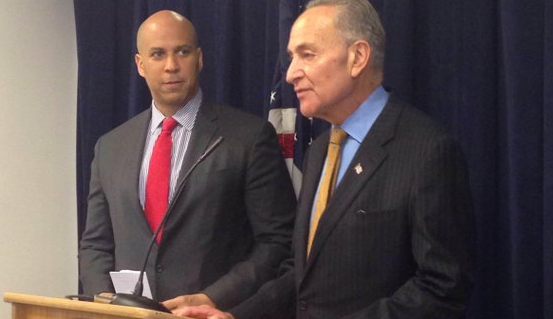 Two senators from the tristate area are looking to reduce minimum sentencing for nonviolent offenders.

Schumer said that he hoped a bipartisan coalition can help push this bill through Congress.

“Crafting criminal justice reform in this Congress is like a Rubik’s Cube, but this group of Republicans and Democrats worked hard to come up with a fair and balanced package that will make a real difference,” said Schumer in a statement. “This bill would make much needed reforms to sentencing for nonviolent offenders, resulting in a much fairer criminal justice system.”

Booker said that the bill can turn the tide in criminal justice.

“For decades, our broken criminal justice system has held our nation back from realizing its full potential,” said Booker in a statement. “Today, we take a step forward. Mass incarceration has cost taxpayers billions of dollars, drained our economy, compromised public safety, hurt our children and disproportionately affected communities of color while devaluing the very idea of justice in America. The Sentencing Reform and Corrections Act is a promising, bipartisan step forward to help right this wrong.”

This new piece of legislation would also narrow the focus on the most serious drug offenders and violent criminals, along with providing better paths for those with minimal non-felony criminal histories. It would provide judges with greater discretion when determining sentences. In addition, certain offenders would be able to qualify for reduced sentences via job training and drug treatment programs outlined in the Corrections Act introduced by U.S. Sens. John Cornyn and Sheldon Whitehouse.

U.S. Sen. Mike Lee, a former prosecutor and another supporter of this bill, recently spoke at the Aspen Institute’s Washington Ideas Forum and mentioned the harm that could be done by excessive sentencing. Lee told the story of a man who was caught three times in a 72-hour period selling marijuana while in possession of gun. He received a 55-year sentence.

“I look at it more for the human costs,” Lee said. “There’s no reason we should lock him up until he’s 80. We can be tough on crime by being smart on crime.”