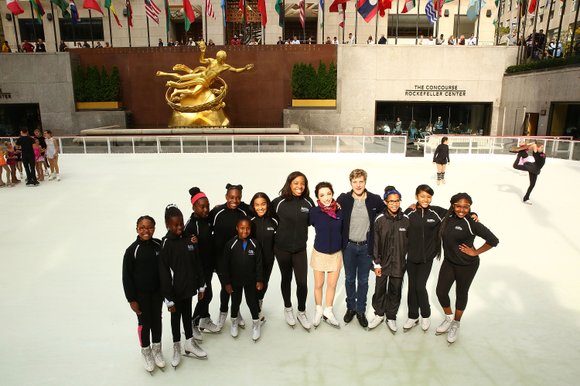 The start of the 2014-15 winter season in New York City kicked off with the official opening of the Rink at Rockefeller Center, the most famous ice rink in the world, Tuesday, Oct. 13.

Sochi Olympic dancing gold medalists Meryl Davis and Charlie White, the first Americans to ever win the title, opened up the festivities. After the performance, Davis and White were joined by NYC & Company President and CEO Fred Dixon, who emceed the ceremonial program and first public skate around the Rink with young skaters from the Ice Theatre of New York and Figure Skating in Harlem.

An international cultural landmark, the Rink is a must-visit destination, located in Midtown Manhattan, steps from Times Square and the Theater District. This season, The Rink offers new experiences, including the Starlight Skate package, as well as a variety of classic and holiday traditions, such as the popular “Breakfast With Santa” and the Radio City Christmas Spectacular package.

“New York comes alive in the winter, and kicking off the season with the opening of the Rink is just as exciting and iconic as it was when it first opened on Christmas Day in 1936,” said Nick Valenti, restaurateur and CEO of Patina Restaurant Group, which operates the Rink and its surrounding restaurants. “No visit to New York City is complete without it. Whether you are an Olympic-caliber skater like Meryl and Charlie or someone who is just getting on skates for the first time, the Rink is a wonderful destination to include in your winter travel and tourism plans.”

The Rink at Rockefeller Center is always the first ice rink in New York City to open each year. Regulars and first-timers always delight in the first skate. The Rink is one of the most visited sites in the world, with more than a quarter of a million skaters visiting annually.

Skating at Rockefeller Center is a tradition for many New Yorkers and also gives visitors a quintessential, New York holiday experience. The new Starlight Skate takes place from 10:30 p.m. to midnight on select evenings. “Breakfast With Santa” is a hit with the kids from late November through Christmas Eve. Families can join St. Nick at Rock Center Cafe and the Sea Grill for a delicious breakfast, gingerbread and gifts given by the elves before heading to the ice for a skate session with Santa.

Several other experiences are available throughout the season. For more information, you can visit www.therinkatrockcenter.com or call 212-332-7654.