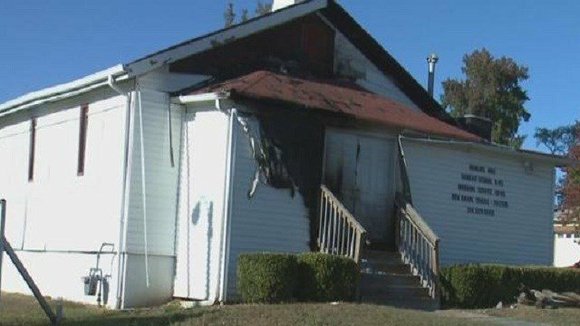 A fire was reported around 4:00 a.m. at the New Life Missionary Baptist Church on Plover Ave. on Saturday Oct 17, 2015. This incident marks the fifth church set on fire this week in the St. Louis area. KMOV

(CNN) -- Arson fires have been set at half a dozen St. Louis-area churches in recent days. Authorities want to know who did it and why.

In each case, the fires were set at an exterior door and when no one was at the facility, according to a joint statement from the St. Louis Police and Fire Departments and the Bureau of Alcohol, Tobacco and Firearms.

"We believe that this fire-setting activity is meant to send a message," the statement said. It didn't specify what the message was.

The six fires were set over 10 days. All were at predominantly black churches, CNN affiliate KMOV reported.

"This is a travesty in our community and our city," said the Rev. Earl Nance Jr.

Although his Greater Mount Carmel Baptist Church wasn't among the churches targeted, he said, "When this kind of thing happens to one or more of our churches we must all come together."

Authorities are investigating, but haven't determined if the fires are connected.

"If you have observed anyone who has recently expressed anger or frustration with our religious community or with these particular churches, we ask that you contact us," the statement said. "If you have noticed anyone or anything suspicious or unusual in the areas near the churches please contact us."