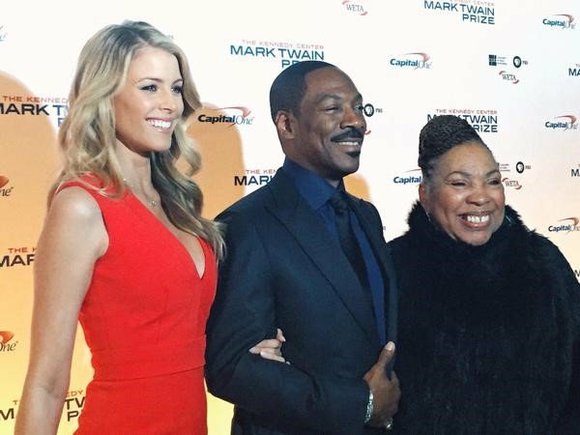 Several days after Lamar Odom, who has now been moved to Cedars Sinai Medical Center in Los Angeles for rehabilitation, regained consciousness after a drug overdose, his maternal aunt, Ja Nean Mercer, told US Weekly, “Lamar has always been blessed with a tenacious, fighting spirit, overcoming insurmountable obstacles to achieve the impossible.” She said the past few days have been no different. He is defying the odds in his toughest battle to date with God’s grace. She is hoping that her nephew will fully recover.

Eddie Murphy walked the red carpet with his longtime love, Paige Butcher, when he was presented with the 2015 Mark Twain Prize for Humor Oct. 18 at the Kennedy Center in Washington, D.C. While accepting the prize, the comedian broke out his Bill Cosby impression during his first standup act in 28 years. Then, in his Cosby voice, Murphy said, “I would like to talk to some of the people who feel that I need to give back my bleeping trophies.” Fellow comedians including Arsenio Hall, Dave Chappelle, Tracy Morgan, Joe Piscopo, Jay Pharoah, Chris Rock and George Lopez were all on hand to cheer Murphy on.

During a recent appearance on the Rev. Al Sharpton’s WLIB radio show, which is live-streamed on the Internet to millions of listeners, “Knock Out” exec-producer and My Lil Star founder Steven Marcano announced that he has been establishing diaper banks in urban communities throughout the U.S. The diaper banks will enable families to pay whatever dollar amount they can afford in return for an endless supply of diapers for the month. “Knock Out” is the number one show on the NUVO television network, which is owned by Jennifer Lopez. Marcano is also in the development stage of a new nonscripted show titled “Ball Out,” which will mentor aspiring basketball players as “Knock Out” does up-and-coming boxers.

According to the Hollywood Reporter, Oprah Winfrey made approximately $45 million in the stock market Oct. 19 simply for revealing she bought shares of Weight Watchers International. The revelation that she purchased newly issued stock that will represent 10 percent of the outstanding shares in the dieting service for $6.79 apiece caused the stock to spike 105 percent, closing Oct. 19 at $13.92. The value of Oprah’s $43.2 million investment, therefore, more than doubled to approximately $88.6 million. Said Oprah, “Weight Watchers has given me tools to begin the lasting shift that I and so many of us who are struggling with weight have longed for.”