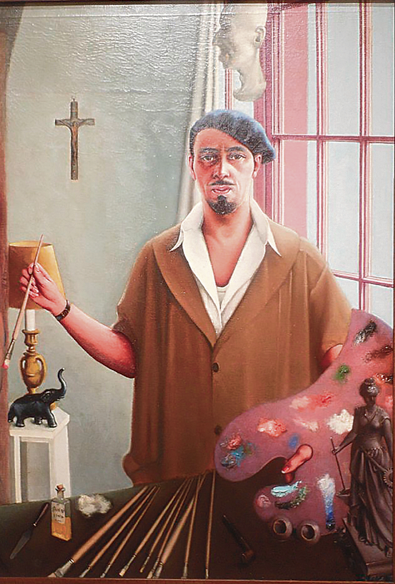 If you’ve read many books on the Harlem Renaissance, then invariably the works of painter Archibald John Motley Jr. have embellished the text and provided you with colorful images of that celebrated era of American history. And if you are not familiar with his work and you’re in New York City between now and Jan. 17, 2016, get on over to the newly designed and located Whitney Museum, where there is an engrossing retrospective of his artistic production.

Motley was born Oct. 7, 1891, in New Orleans, but his family moved to Chicago when he was very young. His father was a Pullman car porter who was temporarily felled by illness, making it necessary for young Motley to help support the family. But once his father recovered and returned to his job, Motley would accompany him on trains that took him across the country. It was during one of these trips, when he wandered too far from the colored section, that he encountered his first experience with racism.

After graduation from Englewood High School, he was offered a scholarship to attend school to become an architect, but he chose to concentrate on painting. Among his most important influences and mentors was John W. Norton.

It is not clear where he derived his early inclination to art, but nonetheless he was the first African-American to attend Chicago’s prestigious Art Institute, from which he graduated in 1918. While a student at the Art Institute, he witnessed the modernist uprising at the famous Armory Show but kept his own modernist desires under wraps for many years. At the school he gathered the academic background and the drawing and painting techniques that would be at the core of his creative ingenuity. He was particularly adept at depicting the human figure, stylistically influenced by the European tradition.

Even so, he had his own way of modifying and modernizing form and content, mainly in his brilliant array of paintings during the Harlem Renaissance era. “Blues,” painted in 1929, which captures dancers on a crowded floor, a cigarette dangling from the hand of one of the women, is exemplary of his work. The mixture of races, represented by his dazzling reds and burnished browns, are apparent, as are other elements of the period, particularly Motley’s interest in decor and musical instruments.

Motley was of light complexion, which may have been an incentive for his endeavor in skin color for many of his portraits. Hardly a crowd scene in his paintings was without a spectrum of varying colors for his men and women. This technique may have been another aspect of his search for his own identity within a gradient of browns, blacks, yellows and reds.

“They’re not all the same color,” Motley said of his depictions in an interview in 1978, three years before his death. “They’re not all Black, they’re not all—as they used to say years ago—high yellow; they’re not all Brown. I try to give each one of them character as individuals. And that’s hard to do when you have so many figures to do, putting them all together and still have them have their characteristics.”