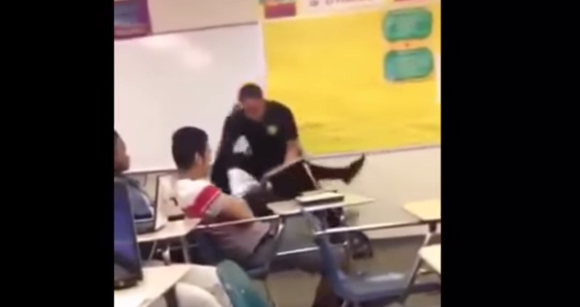 (CNN) -- When Sheriff Leon Lott saw a video of his deputy slamming a student to the ground and tossing her several feet, he said, it made him want to vomit.

The South Carolina sheriff vowed to act swiftly on the case. On Wednesday, Ben Fields, the Richland County deputy, was fired.

Fields is the Spring Valley High School resource officer whose actions Monday were recorded by students and ignited a firestorm on social media. Among the criticisms: his admitted use of "muscling techniques" to get the student out of her chair.

A school district in South Carolina is investigating the actions of school resource officer Sr. Deputy Ben Fields, after video circulated widely on social media Monday showing him violently removing a student from her desk.

But that's only one part of the story. Federal investigators have gotten involved. Another student arrested from the classroom has spoken out. And the sheriff is criticizing a South Carolina law that he says muddles the role of school resource officers.

Sheriff: The student hit the officer

At least three videos have surfaced of the violent arrest at Spring Valley High School. The sheriff said one of the videos shows the girl attacking the officer before the arrest.

"When the officer puts his hands on her initially, she reaches up and she pops the officer with her fist," he said.

Still, after watching all the footage, Lott told reporters that he "wanted to throw up."

"There's no justification for some of his actions," the sheriff told CNN's "Anderson Cooper 360°" on Tuesday night.

The videos show the officer standing over the student, seated at her desk. He puts his arm near her neck, then yanks her backward. The desk, which is attached to her chair, tips over; the student crashes backward onto the floor.

But Fields didn't let go, lifting her slightly off the ground. She flies out of her desk and slides several feet across the floor.

Sheriff's department spokesman Lt. Curtis Wilson said there were no reports of any injuries. And the sheriff said he did not believe the girl was seriously hurt.

"To my knowledge, she wasn't injured whatsoever," Lott said. "She might have had a rug burn or something like that, but she was not injured."

But Todd Rutherford, the student's attorney, said his client now has to wear a cast on her arm.

The girl also suffered a bruise on her head, her attorney said.

Student: It started with a cell phone

The 16-year-old girl who was taken to the ground was arrested on a charge called "disturbing schools." A classmate, Niya Kenny, 18, was also arrested on the same charge.

Kenny told CNN's Don Lemon on Tuesday night the incident started when her math teacher told the other girl to give up her cell phone. The girl refused and defied orders from the teacher and an administrator to leave the classroom.

That's when Fields was called in, Kenny said. The school resource officer asked the girl to leave the classroom with him.

Kenny said the offer moved the girl's laptop off her desk.

"He grabbed her arm, and he put his arm around her neck at first. So that's why you actually see her -- if you get the right video -- then you'll see her trying to swing at him," Kenny said.