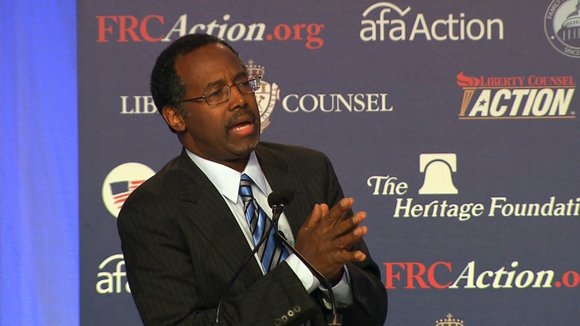 While the bombastic real estate tycoon dominates much of the GOP field, the retired pediatric neurosurgeon with a calm bedside manner is quietly emerging as a serious presidential contender.

Carson is tied with Trump for first place in a new Monmouth University survey of likely Iowa Republican caucusgoers, with the rest of the field lagging by double digits. The Carson surge comes as Trump has set the terms of debate for the past two months, forcing other candidates to shift their focus and decide whether -- and how -- to fight back against his constant attacks.

Carson, who was awarded the Medal of Freedom for his groundbreaking surgical work, is charting his own unorthodox campaign, running as a mild-mannered culture warrior with an inspirational biography. But the challenge is whether he is the Republican who could topple Trump, and move beyond the cult-of-personality phase of the campaign to create a lasting coalition energized more by substance than style.

"The most important number right now is his net favorability, which is about popularity and personality. Our guy is 71 and Trump is at 26. That is the highest we have seen since (President Barack) Obama," said Armstrong Williams, Carson's business manager. "The key for us to be able to maintain such high ratings through the ideas portion of the primary."

No war of words

Carson's gains are especially notable considering he's one of the few Republican presidential contenders who hasn't engaged in a war of words with Trump. In fact, Trump, who has battled with Republican rivals including Jeb Bush and Rick Perry, has gone out of his way to praise Carson.

Carson hasn't criticized Trump. In an interview on CNN's "State of the Union" in August, Carson insisted he isn't trying to "catch" Trump.

"What I am doing is steadily getting the message out, and connecting with the American people," he said. "And they are responding."

And though Trump's rhetoric has upended the Republican presidential race, Carson is no stranger to controversy. He told CNN earlier this year that some people become gay in prison, indicating homosexuality is a choice -- a comment for which he later apologized. And in August, he said that while he wouldn't use drones to kill undocumented immigrants, he would order strikes on caves used to transport people across the southern U.S. border.

Carson will likely roll out policy ideas in the coming weeks. But the most immediate focus for his campaign is the next debate, hosted by CNN and set for September 16 in Simi Valley, California. While the goal of the first debate was for Carson to simply look like a credible presidential candidate, now that he is firmly in the top tier, he must offer more.

Carson seized on momentum from the first debate, flooding the airwaves in Iowa and New Hampshire for two weeks with radio and television ads with Carson speaking directly to the camera.

"Our children face a very harsh future, unsustainable debt. Future generations will suffer," Carson said in the ad. "Washington is broken. The political class broke it. Please join me."

In Iowa, he has hosted a series of "family festivals" in three cities, featuring pony rides, popcorn and entertainment. Some 6,000 people showed up to the small scale fairs that doubled as political events.

"That was really, really smart because most candidates aren't doing events where the candidate isn't the highlight but a side detail," said Kedron Bardwell, a political science professor at Simpson College. "It burnishes his credentials as unconventional and focuses on value issues and family and he did it in a way that is nonthreatening. It was almost like a circus."

As far back as June, Carson's allies dropped thousands of copies of "Ben Carson, Rx for America," on doorsteps in central Iowa, giving him a head start in a crowded field.

"We have to keep doing the same thing. Keep delivering the message that Washington is broken and we need new leaders and you can do that in a way where people are working together and not banging everyone's head together," said Ed Brookover, a senior Carson strategist. "That's Dr. Carson's style."

Carson, who rose to prominence in 2013 when he criticized Obama's health care plan as he sat a few feet away during an annual prayer breakfast, polls well among evangelicals, a voting bloc that will be crucial in Iowa and throughout the South.

Like Trump, Carson has never held an elected office, and is riding a wave of deep discontent with the political establishment.

But as a campaigner, Carson is more like the antithesis of Trump.

Carson announced his run in Detroit, a rollout that included a stop at a school named for him where students asked him for advice on how to study. Trump announced at Trump Tower in New York with a fiery speech that slammed illegal immigrants. Trump brags about his billions while Carson talks about delicate surgical procedures and how his mother's emphasis on reading helped him overcome poverty. And days after Trump packed thousands into an Alabama football arena, Carson held a small luncheon and fundraiser in Montgomery.

Aides said that Carson also has another advantage over the rest of the field because of his connection to African-Americans, who have long celebrated his medical achievements. They argue that he could get 13% of the black vote in the general election.

"A lot of his likeability is driven by his story growing up and his story and career as a neurosurgeon and his personality," said Cody Hoefert, co-chairman of the Iowa GOP. "People say he just seems trustworthy and they compare that to Hillary Clinton and the rest of the field. He has developed a real presence here. And people are responding."

Carson got six minutes and 46 seconds of speaking time in the first debate, landing fifth in the GOP pack. But his closing statement, in which he touted his unique resume, won over skeptics who thought he was this cycle's Herman Cain, an African-American GOP candidate whose 2012 campaign rose to the top before quickly flaming out.

In an August blogpost called "The One I got Wrong," RedState.com's editor-in-chief, Erick Erickson, said Carson's debate performance and the engagement of his supporters made him give Carson a second look.

"He was and is a legitimate contender. His closing at the debate was one of the best closings I've seen in a debate. He did not have the depth as some of the others on the issues, but showed he has been spending his time learning," Erickson wrote in a mea culpa over not inviting Carson to his annual summit. "Above all, he was humorous, respectful and showed a real good nature. And I know, based on all the incoming polling, that I was not the only one to take a second look at Ben Carson. It seems a great many people realized Ben Carson is a legitimate candidate for President."

Carson has proven himself to be one of the most unique fundraisers in the 2016 field, and his unconventional way of raising presidential money could give him a financial base that no candidate can rival.

Carson raises money for both his campaign and super PAC in the same way: by spending big to steadily raise just a little more. While most candidates prioritize the bundlers who collect $2,700 checks from their networks or the megadonors who can write seven-digit donations with ease, Carson's fundraising operation is almost entirely focused on low-dollar donors who have powered a surprisingly effective money shop.

But low-dollar fundraising is vastly more expensive than traditional courting of super PAC megadonors, and Carson's groups have already shown signs of financial duress that may bedevil a candidate who can't count on a seven-figure check from a wealthy donor.

Carson's campaign raised $8.5 million in the opening months of his campaign, two-thirds of which came in donations under $200. That gives the neurosurgeon a vast fundraising base of donors who aren't even close to hitting the ceiling on the amount they can give. Aides have set a $65 million goal through the primary season.

"I absolutely think that Carson could win Iowa, it's more likely if the Trump balloon deflates," Bardwell said. "A lot of those people who are primed to hear stuff that is unconventional will move to another candidate that is not a politician and Carson would be the main beneficiary."