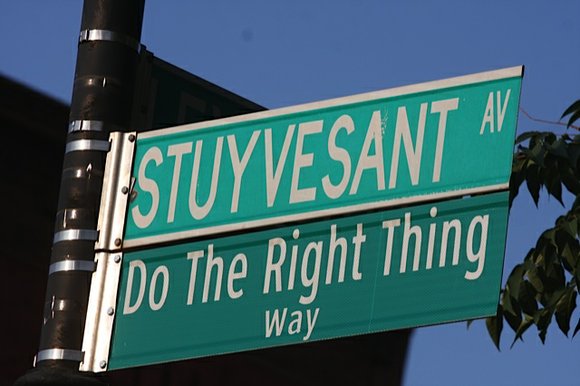 Filmmaker and actor Spike Lee returned to Bed-Stuy Aug. 29 to celebrate the 26th anniversary of his historic movie and pay tribute to the late artist Michael Jackson by renaming part of Stuyvesant Avenue “Do the Right Thing Way” during an overflowing, security-tight block party.

Lee sent the massive crowed into frenzy by repeating part of the lyrics to one of Jackson’s songs, “Can You Feel It.” They screamed and danced nonstop. They all felt it. For after a one-year delay as the bill made its way through the City Council, the moment had finally come for Lee to “Do the Right Thing,” which also included his request for “a moment of silence to remember the 10th anniversary of those who lost their lives in Katrina.”

Brooklyn District Attorney Kenneth Thompson thanked Lee for everything he has done for Brooklyn communities, especially Bed-Stuy. Said Thompson, “As you rose in Hollywood, you made sure Brooklyn rose with you.” He continued by saying that he would be remiss “if I do not use this time to inform those gathered here that I have created a Begin Again program for those with outstanding warrants for minor offenses. As the district attorney I want to get rid of those warrants so you can have a fresh start. You can do so by coming to St. Paul’s Church in East New York.”

Councilman Robert Cornegy, who represents Bed-Stuy, informed the community that as “you celebrate the birthday of one of the greatest entertainers on Earth, Michael Jackson, you are also here to witness and honor an iconic filmmaker whose film has put Brooklyn on the map. It took the council one year because this act is a first, and the council had to modify laws to honor a work of art in this way”

Hopefully “Do the Right Thing Way” will inspire passersby to do as it says.