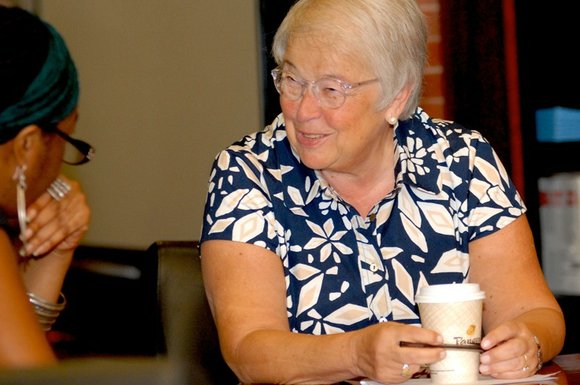 Working with what she has been given by the de Blasio and Cuomo administrations, Schools Chancellor Carmen Farina—having spent 50 years in the service of New York’s public school system—espouses a claim on each and every school child in the city.

“I believe all the children are mine, including the ones in yeshivas and parochial schools. Any child who goes to any school in New York City belongs to us one way or the other.”

And while the debate of public school versus hedge fund-financed charter schools continues amidst the rancor of the Common Core battle, Farina touts universal pre-K expansion, summer STEM program success and increased parental involvement as her badges of honor.

Her affable grandmotherly touch works well with her “from the ground up” working mom, teacher-to-superintendent-to-chancellor storyline. She supports the city’s mantra about public school education, and while she says she hears the concerns over the fears about Common Core and high stakes standardized testing, she states that she supports both.

“It’s very exciting. September will be my 50th year [in education]. It’s a nice way to see my life come full circle. I think we are moving in the right direction. I am very satisfied with what we have accomplished, but I know we still have a lot more to do.”

Then-Mayor-elect Bill de Blasio appointed Farina as schools chancellor in December 2013. She is a former New York City public school teacher, principal, superintendent and deputy chancellor. As the city’s website notes, Farina began her career as a teacher at P.S. 29 in Cobble Hill, later going on to become a principal at Manhattan’s P.S. 6 and the superintendent of Brooklyn’s District 15. Farina was appointed deputy chancellor for teaching and learning in 2004.

Almost two years in, the Amsterdam News asked the schools chancellor how she would evaluate her performance thus far.

“I’m very proud of the fact that the teachers did a satisfaction survey of the principals and it’s over 70 percent. The morale is much higher. They know I am a former teacher. I think when I visit schools I can affirm what they are doing because I know what they are doing,” she stressed, “and I think that has been a big plus, and I think principals feel the same way ... and superintendents, particularly since I hired half of them. They understand that when I ask them to do something, I am not asking them to do anything that I didn’t do myself. And that makes a big difference.”

As for parents, Farina states, “I have done over 40 town hall meetings, and I answer questions right at the table from parents. I was a public school parent, and I think that parents understand that I am there for their children.”

She said that she had just had a meeting with the new Community Education Council presidents at Tweed Courthouse, the Department of Education’s headquarters. “[They were] talking about what they want me to do better or what they want me to know about their specific districts. I have met one-on-one with as many people as I can. I started meeting with the borough presidents. I meet with almost everyone to get a sense of what they need and how I can help,” said Farina, stating she is willing to listen and learn.

Charter schools and standardized testing are two of the biggest debates still raging in schools and stressed-out households citywide, particularly charter schools moving into public schools and leeching resources and precious real estate in the building, with flashy iPads, new books and all—all while paying no rent. There is an air of discontent and competition in some city schools. However, Farina begs to differ.

“I feel parents have the right to make choices. I think what we now have is a much more clearly defined policy of how space needs to be shared. I have worked with a lot of the charter schools, and we are encouraging them to figure out how [they] can work with the other existing schools in the building. So we do have a co-location policy now. We have a team that goes out to the schools that makes a determination—an independent committee making the decision.”

Not addressing the rent issue though, Farina noted that new buildings are being built all over the city, saying, “My feeling is we have a lot more people moving into the city so we have enough customers for all our schools.”

How about the very well funded charter schools getting their own buildings?

“Some of the charter schools do own their building, but land is very expensive in New York City,” said Farina.

The AmNews asked what would she say to public school parents who say a charter school is not paying rent yet is taking up space and resources in their child’s school while the charter school students have laptops, great trips and new books.

Farina responded, “It can’t be answered in a sound bite because every charter is different. Some do their own fundraising on the side for materials, but in terms of the per capita, they get the same per capita as public school children. I am trying to judge them individually, as I do pubic schools.

“I don’t want to see parents and children fighting each other in one building. We’ve been really focusing on that a lot this year, setting this committee so there is a building meeting so that everyone talks to each other and the kids are interfacing.”

Asked about the no-fun policy, stressing, pressurized standardized testing, Farina replied, “That has been a little exaggerated at this point. We did away with the biggest pressure point—and that was promotional policy, which is now more left to the hands of the principals and teachers because research shows that holding a child back doesn’t improve … if anything it hurts their self-esteem. But we need to ensure that they are academically rigorous.

And as for the nail-biting, “can’t sleep for studying” grade-schoolers?

Farina pondered, and then said, “How do we de-stress them without saying opting out is the answer? I’ll be honest with you, I don’t believe in opting out As a parent, I believe that there are challenges that students have to meet everyday of their lives no matter what age they are. Parents need to understand that opting out says to a child, ‘I don’t believe you can do it, therefore you’re not going to have to do it.’

“So what is the obligation in the course of the school year to pay attention? So I am not a fan of opting out. No one in a job can say, ‘Well I don’t want to be evaluated.’ You can’t do that. Common Core is a strategy, it is not a curriculum, but many of our teachers were not used to teaching that way. It involves a lot more talking and a lot more student research.”

New York parents have questions. Farina noted that during town hall meetings, she answers questions on the spot, as opposed to the old days when parents could ask and a response would come in a phone call later.

She seems big on the personal touch. Just the other day, for example, “Borough President Eric Adams did a whole day on women of color in STEM education. I spoke in front of them, mostly middle and high school teachers, and then I went to speak to the parents and grandparents, and to me those are the type of opportunities I look forward to. They are not PR events. They are really more to get my message out about how important is the gender issue, some of the color issue—but even more importantly that technology is for all of us. We’re going to be a part of the workforce of the future. All students need to be exposed to technology. So I think it is an opportunity to meet the community but also have the community meet me,” said the “Brooklyn girl all my lifetime.”

Farina beamed at the mention of the DOE’s summer STEM program for second, seventh- and 10th-graders. She said, “The second-grade parents were among the most enthusiastic, having their children learn about robotics, coding and using iPads. One school was building cities of the future. So it is a combination of math, science and technology, and we have to expand this into our schools.”

Farina said she had just been in a meeting “about how to bring more technology into the schools, even to the point of teaching parents how to use technology, how to use a cellphone.”

A lack of attendance remains a problem, she said. Getting children into schools is paramount, and de Blasio’s big pre-K program campaign promise has created spaces for approximately 50,000 students.

However, Farina said, “It’s not a present—it comes with responsibility. We are using pre-K as a solid foundation for the rest of our lifetime. We want you to send your child to school, making attendance a priority.”

In pre-K, like all schools, she said, “We want to see joy, but also we want to see learning. Principals have embraced this program. Teachers want the pre-K students in their schools, because it makes it easier when they go into kindergarten because they have had a year of socialization skills.”

“All middle schools have after-school programs. They are having fun and academics too, and finding out what their talents are.”

She concluded, “I think teaching is fun, learning should be fun. But learning also has accountability, which means you take a test. I gave a lot of tests because I needed to know what they didn’t learn that I needed to re-teach.

“Teaching is an art. It is an exciting profession.”