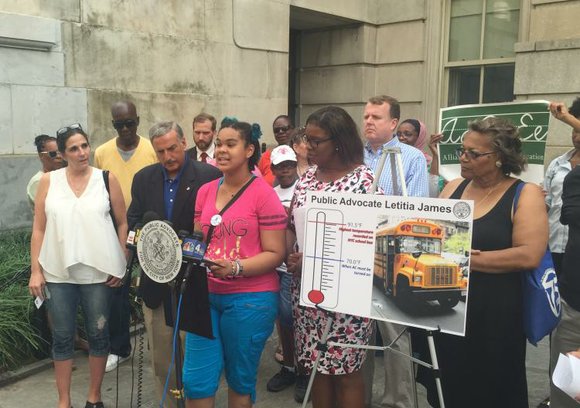 According to a press release, the complaint, filed along with two District 75 children, cites dangerous temperatures as high as 91 degrees recorded on city school buses.

“By failing to protect our most vulnerable children, DOE is violating the law and our moral conscience,” said James in the press release. “Unlike other school districts, District 75 provides for children with disabilities who often cannot voice their anguish while enduring unusually long bus rides during the hottest months of the year.

“DOE has repeatedly failed to take meaningful action, and it’s up to us to fight for the health and safety of these children.”

DOE contracts with private bus companies to transport approximately 27,000 students with disabilities. According to the city code, any bus transporting a child with a disability to and from a school in the city must be air-conditioned when the outside temperature exceeds 70 degrees.

“The conditions on District 75 school buses are completely unacceptable and in blatant violation of the law,” said David B. Rankin of the law office Rankin and Taylor, PLLC, who are representing the two children.

“This problem has been repeatedly documented and repeatedly ignored. We are hopeful that the court will take swift action and bring relief to these children. I am proud to partner with Public Advocate Letitia James on this important issue.”

District 75 is a citywide school district providing educational, vocational and behavioral support program for students who are on the autism spectrum, have significant cognitive delays, are severely emotionally challenged, are sensory impaired and disabled. Because of the nature of the supportive programming, District 75 students attend school through the summer months.

“My son has not had a single air-conditioned bus ride this summer,” said Catherine Simone, mother of petitioner R.S., who has autism and rides a District 75 school bus. “It is outrageous that I have to be concerned for my child’s safety on the school bus. I am grateful that Public Advocate Letitia James is joining us in this fight and hope that DOE finally decides to do the right thing.”

“I want to thank the public advocate for being a champion for this cause,” said Gloria Corsino, president of the Citywide Council District 75. “It is a nightmare for thousands of parents, including myself, to imagine the conditions on school buses transporting our children to and from their programs. Complaints are being ignored, and this is simply not acceptable.”

The lawsuit follows a letter sent by James to DOE in September 2014 after a District 75 child on the autism spectrum was stuck on a school bus in sweltering heat without any air conditioning and had to be taken to the emergency room.

James asked for a number of documents and assurances, and offered to work with the DOE in the 2014 and 2015 school year to ensure that the problem was resolved. However, DOE never provided the requested information and temperatures exceeding 80 degrees have been recorded on District 75 school buses through August 2015.