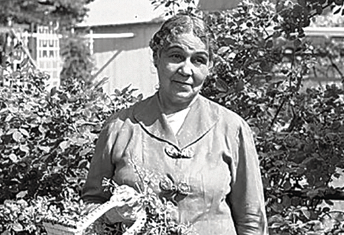 Of the many heralded poets and writers of the fabled Harlem Renaissance, Anne Spencer is among the least known. Her absence from the usual roster of renown may stem from her paucity of poems or her distance from the center of the movement, but not for a lack of elegance and classical style.

A recent reading of Pamela Newkirk’s “Spectacle: The Astonishing Life of Ota Benga,” the Congolese captive caged and put on display in New York City in the early 1900s, renewed an interest in Spencer’s life. Newkirk, a noted journalist, also provides bits and pieces about Spencer’s life and relationship to Benga that is not present in accounts of her literary prowess.

Born Annie Bethel Bannister in 1882 in Henry County, Va., she was of mixed ancestry—Black, white and Native American. Her father was a former slave and her mother the biracial daughter of a wealthy Virginia aristocrat and his enslaved mistress.

Bannister, Newkirk wrote, spent her early years in Martinsville, Va., and later moved to Bramwell, W.Va., after her parents separated. She was placed in foster care with an affluent couple. To some extent, she was homeschooled by her guardians, who didn’t want her to be indoctrinated with inferiority by attending a poor colored school, and she was practically illiterate when she enrolled in the Virginia Theological Seminary and College. She was 11 and the entry into higher education was quite challenging.

“In 1899,” Newkirk noted, “at age 17, she graduated as the school valedictorian and two years later she married Edward Spencer, the city’s first parcel postman. Annie, who favored pants over frilly dresses and poetry over formal religion, continued to delight in simple folks and solitude.”

By 1903, the couple was ensconced in a home built by Edward Spencer in Lynchburg, Va. It was here in the stylish Victorian cottage that she began cultivating the garden where she would devote most of her time when she wasn’t writing. In 1924, she became the librarian at the Dunbar High School Library. At some point, after Benga’s arrival in Lynchburg in 1910, he was tutored by Spencer, and if any of this occurred at her home, it provided him with a commodious and verdant backdrop, possibly redolent and reminiscent of his former rainforest existence.

She may have labored in obscurity if her home wasn’t a kind of waystation for celebrated visitors, such as Marian Anderson, Langston Hughes, W.E.B. Du Bois and James Weldon Johnson, who dropped by with regularity. Johnson had come to the city to form a branch of the NAACP. Upon discovering Spencer’s poetry, he convinced her to allow him to publish “Before the Feast of Shushan” in the Crisis magazine. “Although most of her verse is about nature,” wrote the editors of the “Norton Anthology of African American Literature,” “Spencer’s best poetry, marked by the irony and some of the complexity typical of literary modernism, tends to be more concerned with gender than with race.” Indicative of this penchant are two poems, “Lady, Lady” and “Letter to my Sister.”

After refusing overtures from H.L. Mencken to publish in the American Mercury, not desiring her poetry to be criticized by a non-poet, Spencer found more favorable outlets at Survey Graphic, Opportunity (the Urban League’s publication) and Lyric. Her poetry was also included in a number of anthologies, including Johnson’s “Book of American Negro Poetry” and Countee Cullen’s “Caroling Dusk.”

Not more than 30 of her poems were ever published, and her production became even more reduced after the death of her mentor Johnson in 1938. After her husband’s death in 1964, Spencer became even more of a recluse, devoting most of her time to nurturing and tending her garden, which had become the talk of the town and discussed all the way to Harlem.

In effect, her work with gardenias, roses and a crop of garlands soon exceeded her renown as a poet, which seemed not to bother her a bit. Even so, she continued to write, if only for her own pleasure and amusement. She also became an active member of the local NAACP and often reminded members that it was in her home that the branch was founded in 1919.

“During her last illness in 1975,” the “Norton” editors wrote, “her friends, unable to make anything of these scraps, apparently discarded them. She died later that year in Lynchburg. Her home, its garden restored, has since been accorded the status of historic landmark. This is an entirely appropriate honor. Spencer’s voice as a poet was distinctive, assured and complex; it deserves further study and appreciation.”

Now dubbed the Anne Spencer House, the landmark is among the most cherished and visited sites in Lynchburg and is included in a number of tourist packages. Some of her papers, unpublished poems and other personal memorabilia are housed in collections at the University of Virginia. A few of her letters can be found at Yale University.

It should be noted that she was the first African-American from the state of Virginia to be included in the “Norton Anthology of Literature by Women” in 1923.

This opening stanza from her poem “White Things,” which was rarely published after it appeared in the Crisis, is a sample of her style. “Most things are colorful things-/-the sky, earth, the sea/Black men are most men/but the white are free!/White things are rare things;/so rare, so rare/They stole from out a silvered world-/-somewhere./Finding earth-plains fair plains,/save greenly grassed,/They strewed white feathers of/cowardice, as they passed.”