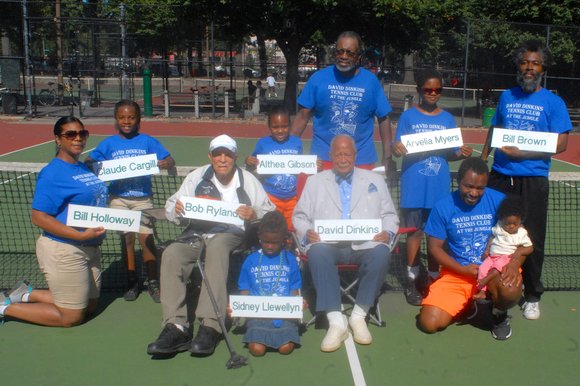 The lyrics, “I believe the children are our future/ Teach them well and let them lead the way/Show them all the beauty that they posses inside,” were made famous by guitarist George Benson first, and then by songstress Whitney Houston on the first of her many multi-platinum albums.

Although they were composed by Michael Masser, these words from his song, “The Greatest Love of All,” could have been composed by Sam Penceal, his wife, Bernadette Penceal, and former New York City Mayor David Dinkins. The time and re- sources that they personally

dedicate during the summer teaching tennis to the children in their David Dinkins Tennis Club exemplifies just that.

“It was Sam’s idea. He does the work. He puts this thing together, puts in the time. It’s all for the kids, their development. And equally as important, it’s about them learning and their education,” said Dinkins.

As they concluded their sixth season this past Saturday, amidst all of the pomp and circumstance on the gated courts of Harlem’s Fred Johnson Park at West 150th and Seventh Avenue, a young participant about 8 years old thwarted her mom’s several attempts to depart, because they had not yet given out the

books promised to her and the club’s other participants. The ceremony honoring legendary tennis great Althea Gibson, who learned to play tennis in the Harlem area in the late 1930s and early 1940s, and the dedication of two of the park’s eight courts to Din- kins and Bob Ryland, both of whom have made significant contributions to tennis in the metropolitan area, had not yet concluded.

“We encourage the children to read, to have an enthusiasm for learning and their parents to participate in their education and tennis experience,” said Penceal, a former New York City school principal, educator and dedicated certified tennis instructor.