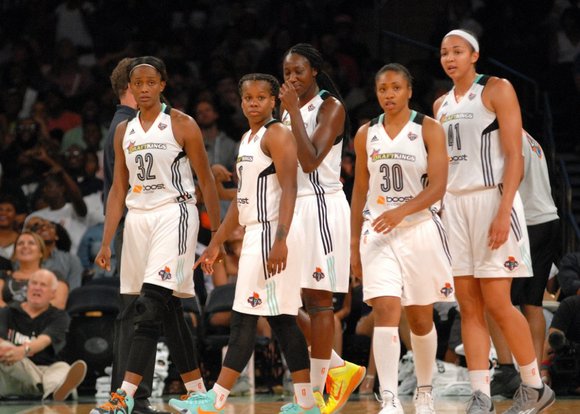 It has been a banner week for the New York Liberty. Last Friday’s home court win over the Minnesota Lynx secured the Liberty its first trip to the playoffs since 2012. A victory the next day over the Connecticut Sun made New York the first WNBA team this season to reach 20 wins. The good news kept coming early this week, when guard Epiphanny Prince was named Eastern Conference Player of the Week for games played between Aug. 24 to 30. Then, on Tuesday, post player Kiah Stokes was named Rookie of the Month for August.

“We’re confident in who we are. We’re coming to- gether even more so every day,” said coach Bill Laimbeer after the win over the Lynx. “The media is getting bigger and bigger. We’re embracing that, which also fuels the fire for hold- ing each other account- able and going out there and making sure we com-

pete every minute of every game.”

Crowds are growing, making lots of noise and staying until the final buzzer is sounded. A group of fans even traveled to the Connecticut game, evoking the enthusiasm of season’s past.

While Laimbeer and the players saw last Friday night’s game versus Minnesota as just another regular season game, others saw a possible preview of this year’s WNBA Finals. Liberty veterans such as Swin Cash and Tanisha Wright understand keeping things in perspective, and they continue to impress that on the team’s less seasoned players.

“It’s a regular season game that gives us positioning for home court advantage,” said Cash. “I understand the importance of having home court throughout the whole play- offs, and we’re in a position to be able to have that.”

City. “I’m happy that I am able to be here, help them winning and bring excitement back to the city,” she said.

Tuesday night, the Liberty pulled out a tough 80-75 win

over the Atlanta Dream in overtime. Sugar Rodgers had 23 points.

“Off the court we get along really well, and on the court we all have a common goal and we want to do some-thing great together,” said post player Carolyn Swords. “In [tough] games, it’s good to be able to really lean on each other and be able to trust each other. That’s certainly helping us.”