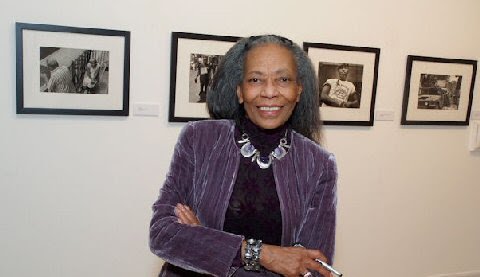 In several ways, Toni Parks-Parsons personified her famous father, Gordon Parks. She was a photographer, an artist and a musician deeply committed to African-American life and culture. Parks-Parsons died Aug. 24 in England. She was 74. Three of her close friends and colleagues reported they had received calls from her over the past two weeks and that she wasn’t doing very well.

For many years after moving to England, Parks-Parsons would return to the states for events commemorating the legacy of her father as well as to host her own exhibits, none more consistent and rewarding than those at the Gordon Parks Gallery and Cultural Arts Center at the College of New Rochelle’s School of New Resources on the John Cardinal O’Connor Campus in the Bronx.

“Bridging the Gap: Photographs by Gordon Parks and Toni Parks” was the title of the last exhibit by the father and daughter at the gallery in 2013. Two years earlier, a similar exhibit appeared at the college’s Castle Gallery on the main campus and was curated by Katrina Rhein, the gallery’s director. This show was the first featuring the father and daughter, and some 70 pieces were presented from the college’s collection, including photographs, an assortment of books and videos by and about the artists.

To some degree, the exhibits were an outgrowth of Parks-Parsons’ long association with the college, beginning in the early 1990s when she worked there as a counselor for adults returning to school and as a photographer during graduations.

“This is a dream come true,” Parks-Parsons told reporters at the Castle Gallery opening, referring to her photos being juxtaposed with her father’s. Her father’s eminence as a photographer was intimidating, she added. “That’s why it took me so long.”

Parks-Parsons’ development as a photographer and artist began very early during her coming of age in White Plains. Much like her father, she was somewhat reticent, and information had to be pulled from her in pieces. Some of the pieces of her life can be gleaned from her father’s memoirs. From them, we learn that she was born Nov. 4, 1940, in Minneapolis. She was still a baby when the family moved to Chicago.

In one of her father’s books, there is a photograph of her smiling broadly as the family embarks for Paris in 1950. She was the oldest daughter of her father’s first wife, Sally, and her two brothers, Gordon Jr. and David, can be seen posing with her. It was during their stay in Paris that she began to express her resistance to any form of racism and discrimination. One day, her father recalled, she came home from school saying she wasn’t going to return to the class because of a book that described African-Americans as “darkies” and “pickaninnies.” “I confronted the headmaster and explained why neither David [his son] nor Toni was at school,” Parks wrote. “He expressed shock and immediately banned the book from class.

“It had never occurred to me that Toni could express such rage,” he continued, “and I was proud of her reaction when bigotry touched her small universe.”