The city's first Joe's Crab Shack location has closed its doors in Harlem.

The casual dining seafood chain has closed their restaurant located at 2349 Frederick Douglass Boulevard at West 126th Street, according to a source close to the company. Workers were seen taking down signage on Tuesday. The company's website has also taken down the webpage for the location. 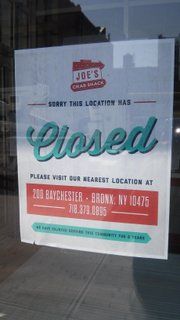 Sources told the AmNews that the reason for the closure was due to slow business and that while some workers have been transferred, several employees lost their jobs. Nearly 350 people were hired when the restaurant opened in 2013

Joe's Crab Shack's uptown location was the restaurant chain's first New York City location. Another location was opened at The Mall at Bay Plaza in the Bronx in 2014.

The Harlem location took up a 10,000-square foot space in a new building that is also occupied by Party City, DSW, Capital One Bank and Blink Fitness.

The restaurant was part of a wave of several chains that built uptown locations including Red Lobster, Perkins Restaurant and Bakery and Buffalo Wild Wings.

The AmNews has reached out to Ignite Restaurant Group, which owns Joe's Crab Shack, for further comment.