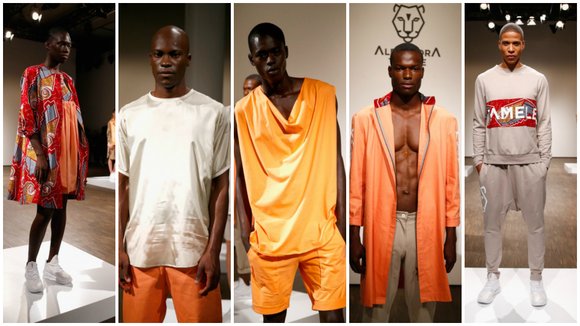 Alexandra Tamele, 22, presented a striking, brightly colored collection of menswear and a women’s line at the Berlin Fashion Week shows. She is a graduate of BEST-Sabel Design School in Berlin. Silhouettes were loose-fitting yet casually shaped. Dresses were smartly shaped in smock styles and exotic prints. Men’s sportswear took on a modern approach for spring-summer 2016.

There were many classic cuts in her line, however, there are changes in the pant shapes, fit and a man’s style of dress. It was a case of street style meets contemporary elegance. Tamele’s designs were also a part of last October’s international fashion show at the Black Fashion Week Paris.

Alice McCall, another noticeable designer on the Berlin Fashion Week bill, showed a collection that was playful. She used unique detailing and charming folk-like craftsmanship to create her charismatic collection. McCall started out as a stylist in London, where she then began designing and selling one-of-a-kind silk pieces at London markets. Her name grew quickly, and before she realized it, she had established a brand that allowed her to launch a label in 2004. She launched her first boutique in 2009, and opened her first flagship store in 2010. While her clothes are in four boutiques across Australia, she has also designed sell-out collections for major international retailers, including Target and the General Pants Co.

Designer Hien Le acquired several experiences in different patches of the fashion scene and chose to implement his collected skills in his own, independent fashion label. For spring-summer 2016 at the Mercedes-Benz Fashion Week Berlin shows, Le concentrated on discrete cuts and subtle application of details. He maintains his claim to manufacture clothing that combines diligent designs with accurate workmanship. Everything is produced in Germany. He has received great feedback on his first collection.