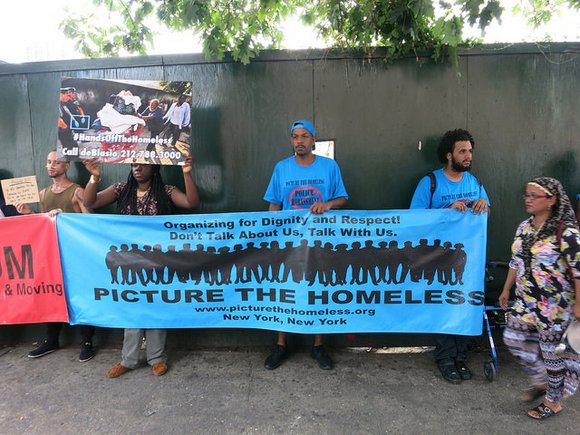 Homeless people and their allies rallied on 125th Street Wednesday, demanding an end to rampant violations of the rights of homeless people by the NYPD under Mayor Bill de Blasio.

“The mayor needs to realize the people of this city are not going to lie low and allow the NYPD to use abuse tactics on the homeless,” said one member of Picture the Homeless. “He and his NYPD will be accountable for their acts of brutality and their patterns of rights violations.”

Picture the Homeless says 125th Street has been the epicenter for abusive policing, with aggressive “sweeps” of homeless people occurring up to three times a day, and cops telling homeless people they’re acting under orders from the mayor.

Similar NYPD crackdowns are happening across the city. Recent reports indicate that 80 sites are scheduled for police “clean up.” Referred to as “encampments,” the sites are simply places where homeless people congregate, say homeless advocates.