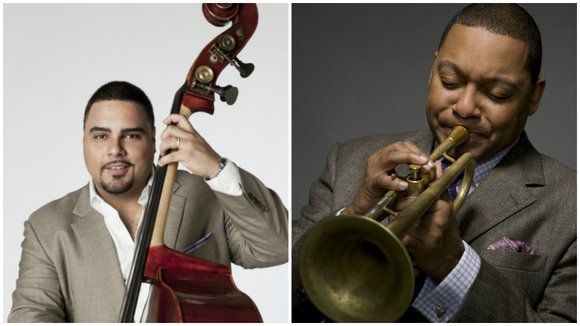 Bassist Carlos Henriquez had just returned from Cleveland, where he worked with the Jazz at Lincoln Center Orchestra in collaboration with the Cleveland Orchestra, having performed Wynton Marsalis’s composition “Swing Symphony” when we talked.

A member of the Jazz at Lincoln Center Orchestra with Marsalis for the past 13 years, the Bronx native discussed his entry into the music genre. “My parents played music, so it was a natural introduction for me. When I was young, there were music programs for kids. It’s a shame there aren’t more of these types of programs in the school curriculum today. My parents were great and encouraged me. I was accepted into the Music Advancement Program at Julliard, a program that helped me and gave lots of inner-city kids an opportunity. Through their workshops and various programs, I began to see a future in music and met others who held the same ambitions in music as me. I started with guitar and became good at it, but then I fell in love with the bass. I learned the bass at Julliard from my teacher John Schaeffer. Later, other bassists took me under their wing and taught me even more,” said Henriquez, who performed with Latin greats such as Tito Puente, Eddie Palmieri and Celia Cruz since the age of 14.

Henriquez went on to explain his relationship with Marsalis and his musical choices. “I had an in depth one-to-one classical teacher who taught me for 13 years before I began playing with Wynton and the Jazz at Lincoln Center Orchestra. I am heavily into jazz, Afro Cuban and classical music. I love Brazilian music and listen to music from all over the world. However, at this time, I focus mostly on the genre of jazz and Afro Cuban jazz.

“I met Wynton through a trumpeter friend named Steven. Steven invited me to hear a JALC orchestra rehearsal. I was playing acoustically, but it blew my mind when I heard them playing music for Alvin Ailey. They were doing ‘Sweet Release and Ghost Story.” I was hooked. Once I met Wynton, I started hanging out with him and the orchestra. I went to their rehearsals and then Wynton started calling me to play gigs. I got to meet so many people, like Shirley Horn, Willie Nelson, Bob Dylan, James Taylor, Paul Simon, Lenny Kravitz and Stevie Wonder, through a JALC collaboration. I owe Wynton a lot for helping me and making me part of the JALC Orchestra. He could have hired someone else with more experience, but he helped me and I am so grateful to him. Wynton does a lot of good things. He helps promote young musicians. I was 17 when I met Wynton, and he has given me several opportunities to grow. He asked me to be the music director when we went to Cuba in 2010. It was a great learning experience for Cuba, for me and JALC,” Henriquez recalled.