Liberty clinch first in the East 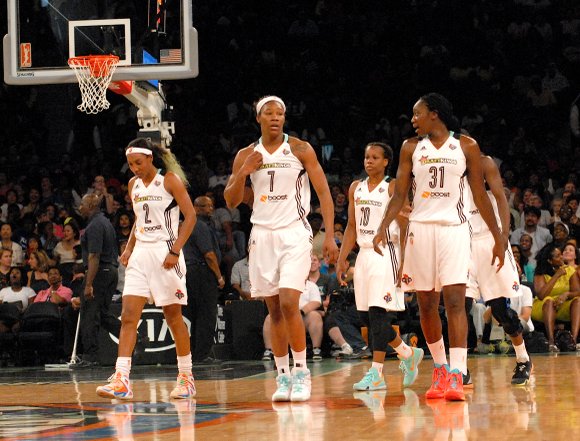 A 75-71 victory over the Minnesota Lynx Sunday evening allowed the New York Liberty to clinch the No. 1 seed in the Eastern Conference for the first time since 2002. This win guarantees the Liberty home-court advantage through the first two rounds of the playoffs.

After a season filled with good news—guard Epiphanny Prince was named Eastern Conference Player of the Month for August—last week was rough. The Liberty suffered a crushing 82-60 defeat on home court last Thursday at the hands of the Chicago Sky, with New York shooting just 34.8 percent from the field and 66.7 percent at the free-throw line.

“We probably took them a little for granted,” said veteran guard Tanisha Wright. “They came out and punched us in the face, and we couldn’t recover from it. It’s a wake-up call that everybody wants it just as bad as we want it. We’re not the only team that wants it.”

Coach Bill Laimbeer noted that the Sky out-defended the Liberty, which was quite stunning because the Liberty are the top defensive team in the WNBA. He called the defeat a great lesson for the coaches and players.

“They showed us the atmosphere we’re going to face coming into the playoffs,” Laimbeer said. “It’s good experience for our young players and our collective team to show the intensity level, energy and effort you have to put forth to win a game.”

Forward Swin Cash said the Liberty players needed to take a deep breath after the Sky loss, get a little rest and come back strong against the Lynx, which is precisely what happened.

Guard Candice Wiggins said it was obvious how focused the Sky were, determined not to be swept by the Liberty this season. “You have to swallow that, give them credit for what they did,” Wiggins said. “The good news is that this isn’t the end of the season. It really is a new start.”

Unfortunately, the start won’t include rookie guard Brittany Boyd, who suffered a fracture to her left wrist during the third quarter of the Chicago game. She underwent surgery Sept. 4. With recovery time expected to take five to six weeks, she is done for the 2015 season.

The Liberty close out regular season play Friday night versus the Washington Mystics.