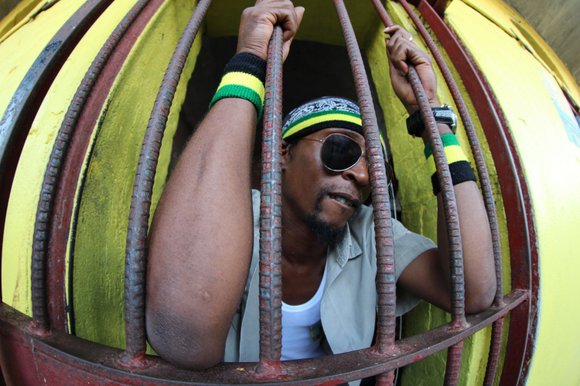 Creatively Speaking Film Series celebrates the opening of its 20th consecutive season Sept. 11 to 13 with “Spotlight Caribbean” at MIST/Madiba Harlem. From Jamaica to Barbados, Trinidad and Tobago to Haiti, the season premiere of our monthly series features a diverse selection of documentary and narrative films, with each screening followed by a dialogue with the filmmaker.

Spotlight Caribbean opens Sept. 11 with a sneak preview of Gladstone Yearwood’s narrative film “Sweet Bottom” (2015). When Roy Ashby is suddenly deported to his native Barbados, he is desperate to return home to Brooklyn, where he immigrated as a child. With a new love interest and no means of support, he turns to an old friend who takes Roy’s life in a dangerous direction. “Sweet Bottom” tells the story of the emigrant experience as rarely seen from inside the Caribbean. Roy’s journey reveals how understanding one’s culture and the power of love can lead to a surprisingly positive path.

“Art Connect” (2014) by Miquel Galofre reveals the profound impact of creative expression on a group of students from Laventille, one of the most economically challenged communities in Trinidad and Tobago. The Art Connect program at Success Laventille Secondary School offers students the opportunity to collaborate with local artist Wendell McShine and musicians from the Freetown Collective. Galofre documented this life-changing experience and provided students with GoPro cameras so they could actively participate in telling their stories. “Art Connect” was selected as the Best Documentary Feature at the MAC Film Festival in Brazil, Best Documentary at FEMI in Gaudeloupe, Best Feature and People’s Choice Award at the Trinidad and Tobago Film Festival.

“The Price of Memory” (2014) by Karen Mafundikwa examines the enduring legacy of slavery and the case for reparations in modern Jamaica. When Queen Elizabeth II visits Jamaica for her Golden Jubilee in 2002, she is petitioned by a group of Rastafari for slavery reparations. The film traces the ensuing lawsuit brought by attorney Michael Lorne and the history of the fight for reparations from the 1960s to today. The film was nominated for Best Documentary at the Trinidad and Tobago Film Festival and was an Official Selection at the Pan African Film Festival and the Africa in Motion Film Festival.

“Songs of Redemption” (2013) by Galofre and Amanda Sans explores the transformation of inmates at the General Penitentiary in Kingston, Jamaica under a superintendent who implements programs in practical training and creative expression. Told from the perspective of prisoners, the film is a moving story of redemption and rehabilitation. “Songs of Redemption” won the audience prize for Best Documentary and was co-winner of the jury prize for Best Documentary at the Trinidad & Tobago Film Festival.

“Women of the West Indies” (2012) by Stephanie and Steven James presents portraits of 41 Caribbean women from across the Diaspora. This screening will feature portraits of Lili Bernard, Rosie Gordon Wallace and Nora Gasparini. Lili Bernard, born in Cuba and residing in Los Angeles, is an actress and activist campaigning for the visibility of Black, Asian and Hispanic artists in the vast California cultural landscape. Rosie Gordon Wallace founded the Diaspora Vibe Gallery of Miami Beach, a platform to cultivate the vision and diverse talent of emerging artists from the Latin and Caribbean Diaspora. Nora Gasparini is originally from Martinique and now resides in Bali, where she has established L’Atelier Parfums et Creations, an olfactory workshop where visitors can develop their own perfumes from local, natural resources.

“H-2 Worker” (1990) by Stephanie Black reveals the systematic exploitation of Caribbean laborers by the Florida sugar industry for more than 40 years from 1943 through the 1990s. Providing historical context for the current crisis surrounding the denationalization and deportation of Dominicans of Haitian ancestry, the film also illuminates the current debate over guest worker provisions in immigration legislation. Winner of the Grand Jury prize at the Sundance Film Festival, the film was clandestinely shot in the cane fields near Lake Okeechobee, Fla.

The Creatively Speaking Film Series has become known as the leading film series for presenting independently produced media of realistic, universal portrayals of people of color. Shorts, documentaries and narrative films tell universal stories that are rarely presented in the mainstream media. Screenings are followed by lively and thoughtful discussions about the art and craft of filmmaking as well as the social issues presented in the films.

All screenings are at MIST/Madiba Harlem, 46 W. 116th St., New York, N.Y. Advance tickets are available at http://tinyurl.com/PC9QAYU. For information and showtimes, visit www.creativelyspeaking.tv or http://bit.ly/1U4OaDn.