The Retreat at Altos del Monte 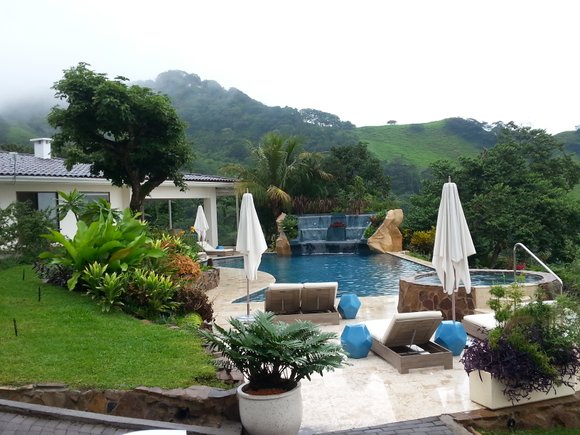 Located between Nicaragua to the north and Panama to the south, Costa Rica is truly a jewel of Central America. This visit was the second to this amazing country that captivated my mind, body and spirit several years ago. Although I wasn’t sure how, I was certain I was in for another amazing adventure.

After just a short three and a half-hour plane ride from Houston (about five hours from both New York City and Chicago, six hours from Los Angeles and four hours from Atlanta) into San Jose, to the capital and the largest city in the central region, I was met by Walter Ramirez of Walter’s Taxi and Tours, a very friendly, cheerful and genuinely warm native who will welcome you to Costa Rica like family.

During the approximately 45-minute drive from the airport, Walter joyfully pointed out the parks, shops, restaurants and history of the small towns through which we drove, followed by the various trees, fruits, animals and more that we passed as we gently meandered up the mountain.

Along the way, the lightly cascading rain aptly punctuated the beautiful, lush, emerald, lime, pea and olive hued foliage lining both sides of the road that is so typical of the Costa Rican countryside. When it seemed as if we had ascended as high as the mountain would allow, we made a sharp turn past two massive iron gates, then made a steep, winding descent to one of the most beautiful resorts I have ever seen—the Retreat at Altos del Monte.

As soon as we stepped out of the van, Heather appeared—a radiant presence with stunning, natural auburn hair whose long, thick tresses had been gracefully drawn to one side and cascaded over her left shoulder.

Dressed from head to foot in a light, flowing, white cotton T-shirt and pants, sans footwear, her only adornment was a striking silver necklace with brightly colored gemstones that punctuated her beautiful, broad smile and vivacious spirit.

There is a difference between greeting someone in such a way because you know you should, or have to (for example, because that is standard hospitality industry practice), and allowing your natural authenticity—which cannot be feigned—to shine through.

As the resort’s general manager, a chef, permaculturalist (someone who maintains and cultivates agriculture by relying on self-sustaining ecosystems with renewable resources) and long-time Costa Rican resident (she is American), Heather truly embodies the Costa Rican “Pura Vida” (“Pure Life”) lifestyle. But it is immediately evident that the rest of the staff (also primarily dressed in white, which gave the retreat a heavenly feeling)—male and female, front desk to kitchen, landscaping, housekeeping, spa personnel, and so forth—embodies it as well.

Opened in March of this year, the Retreat at Altos del Monte is named after its location in Altos del Monte de Atenas, “altos del monte” meaning “the top of the mountain.”