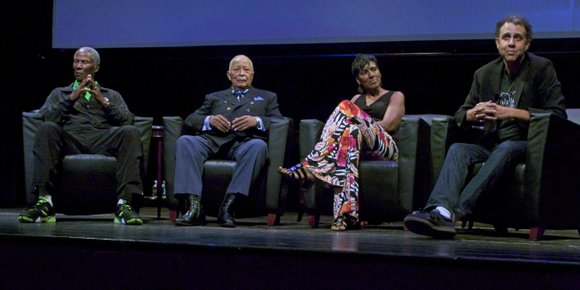 Gibson (1927–2003), a truant from the rough streets of Harlem, emerged as the unlikely queen of the highly segregated tennis world in the 1950s. Bringing a fierce athleticism to the game, she was the first African-American to play and win at Wimbledon and the U.S. Nationals (precursor to the U.S. Open) — a decade before Arthur Ashe. Gibson’s life and achievements transcend sports and are part of African-American history.

The documentary, produced and directed by Miller (“A Chef’s Life,” “Private Violence”), explores Gibson’s roots as a sharecropper’s daughter, her family’s migration north to Harlem in the 1930s and her mentoring from boxer Sugar Ray Robinson, Dinkins and others. Interviewees include Dinkins, Wimbledon champion Dick Savitt and Billie Jean King, winner of 39 Grand Slam titles, who also serves as one of the film’s executive producers.

The talk-back after the screening featured Leslie Allen, former ATA, NCAA and WTA champion, along with Dinkins, Carrington and Miller.