A Giant case of poor decisions leads to season-opening loss 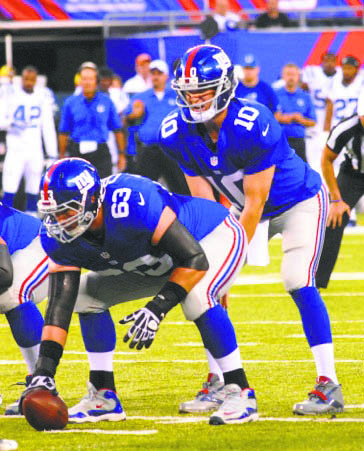 The Giants’ distressing 27­-26 defeat to the defending NFC East champions the Dallas Cowboys on the road Sunday night in the regular season opener for both teams may foreshadow a campaign of squandered opportunities for a franchise desperate to end a three­-year playoff drought. They couldn’t have lost in a more dejecting and perplexing manner.

Leading 23-­20 with 1:54 remaining in the final quarter, the Giants negligently mismanaged their next three downs, eventually kicking a field goal to go up 26­-20 but allowing the Cowboys to regain possession and execute a 72­-yard drive in one minute, 27 seconds, culminating in a game-winning 11-yard touchdown pass from quarterback Tony Romo to tight end Jason Witten.

With the ball inside the Cowboys’ five ­yard line, Giants QB Eli Manning, unnecessarily concerned with how many timeouts the Cowboys possessed, insensibly instructed running back Rashard Jennings not to score on his first two rushes in a misguided attempt to bleed the clock. On third down, with the Cowboys out of timeouts, offensive coordinator Ben McAdoo incredibly called a pass play. With no one open, Manning recklessly threw the ball out of the end zone instead of taking a sack to siphon time.

Manning, McAdoo and head coach Tom Coughlin, who failed to take control of the chaotic situation, are equally responsible for the collapse.

“It was definitely an option to take a sack and run 40 seconds off the clock and give them less time,” said Manning. “That’s 100 percent on me.”

Stating the obvious, Coughlin acknowledged, “The decision to throw the ball on third down was not a good decision.” The most damaging judgment was not playing to score a touchdown, which would have put them ahead by at least nine points, 10 with a successful extra point.

The Giants’ focus has shifted to the Atlanta Falcons, who they’ll host this Sunday at 1 p.m. at MetLife Stadium. Nevertheless, the frustration of that first loss will still linger.