The chemise dress is back for spring 2016 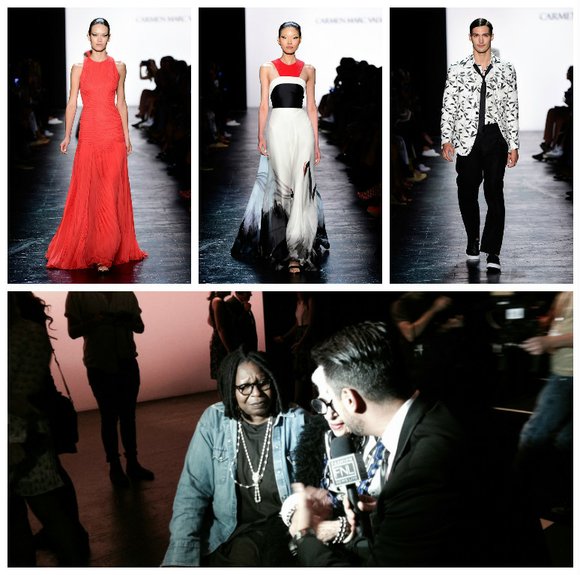 Carmen Marc Valvo is leading the way with his stylish, color-blocked chemise dresses that are bright and smart-looking. Before the show at New York Fashion Week’s new Moynihan Square headquarters on West 33rd Street in New York City, it was a pleasure to meet actress Whoopi Goldberg from “The View,” who was sitting in the front row with Iris Apfel, fashion’s grand dame. Actor Alec Baldwin was also seated in the front row with his children.

Valvo’s day dresses, as well as some evening gowns, were designed in classic silhouettes. Colors were bold and bright. Geometrically shaped tops and bottoms of frocks were structured at angles that will make your head turn. His tailoring techniques and use of accents such as beading, flowers and sequins are outstanding.

For evening, there were exquisite gowns with slips and strapless or halter tops, deep backs and longer skirts that had an accordion pleated effect. Other gowns had short trains. Some of Valvo’s prints exhibit the artistry of a Zen garden. Patterns were minimal and austere with bold strokes of color and form. In swimwear and lacquered leather dresses, patterns such as perennials of ebony and ivory brought to mind splashing watercolors. The focus was on the chemise.

Supima’s designs were mostly A-shaped. There were beautiful gowns for evening, including an interesting two-toned strapless look. Jumpsuits were shown throughout the week by various designers, as well as lots of one-shoulder dresses. Most of this designer’s gowns were too long, and models had a difficult time walking on the runway. In these types of outfits, it does take a bit of skill.

This collection offered many feminine details, such as ruffles, flounces, back zippers and peek-a-boo shoulder cuts. Color combinations consisted of pink with muted burgundy and yellow. This show featured several African-American models, which was very nice to see. One pretty strapless dress had a flare skirt and balloon hem.

Zag Toi’s show was overbooked, but he showed in the smallest venue at Fashion Week’s Moynihan site.

Nevertheless, his collection was absolutely beautiful. The show opened with his stunning models in fabulous white suits with longer jackets buttoned once over fit-and flare pants. The very wide-brimmed white hats added a dramatic dimension to these softly styled Zang Toi designs. It was a lot like a scene straight out of the 1970s with music from the movie “Valley of the Dolls.”