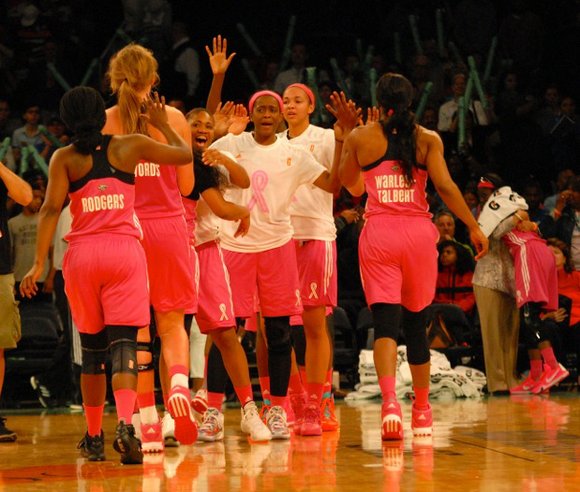 It was a fight to the finish in the first round of the WNBA playoffs for the New York Liberty, but the team prevailed with a 79-74 victory over the Washington Mystics in game three. The win sent the Liberty to its first Eastern Conference finals since 2010.

Although the Liberty decisively trounced the Mystics in Washington, D.C., both games in the series played at Madison Square Garden were tight, back-and-forth battles with multiple lead changes. In the deciding game three, the Liberty’s bench, most notably guards Sugar Rodgers and Candice Wiggins, stepped up in huge fashion, combining for 32 points. Although it is a coincidence that both players won WNBA titles with the Minnesota Lynx, Wiggins in 2011 and Rodgers in 2013, it is meaningful that both these players have a championship mentality.

Wiggins was 4 for 4 from the 3-point line, and Rodgers achieved a career high for the playoffs. Both first-round home games had attendance of over 10,000, a sellout of the entire lower bowl. Celebrities in attendance included director Spike Lee, who was on his feet cheering. Crowds have recaptured the Liberty fire that fueled the team to the WNBA Finals in its early years, but that has ebbed in recent memory.

Indeed, Tina Charles has brought an amazing sense of purpose to the Liberty. A New York native, she has proved to be a quiet but intense leader who has brought her teammates onto the same page. Combining her with the quiet scoring powerhouse, Brooklyn native Epiphanny Prince, has been brilliant. Recognition must also be given to veterans Tanisha Wright and Swin Cash, who remind teammates how to burn bright with controlled and sustained energy. Last Thursday, coach Bill Laimbeer was named WNBA Coach of the Year for 2015.

He is a unique presence in women’s basketball—a loud, seemingly unsentimental bad boy who has quiet reverence and respect for the women’s game on which he has made an indelible imprint.

Because of Pope Francis’ visit to New York City, the Liberty were forced to play back-to-back games, taking on the Indiana Fever last night.

In the early days of theLiberty, it was said this team knew how to take things up a notch in the playoffs. Fans are hoping that continues to the long sought-after championship.