‘The Divine One,’ Sarah Vaughan, a vocalist of extraordinary range 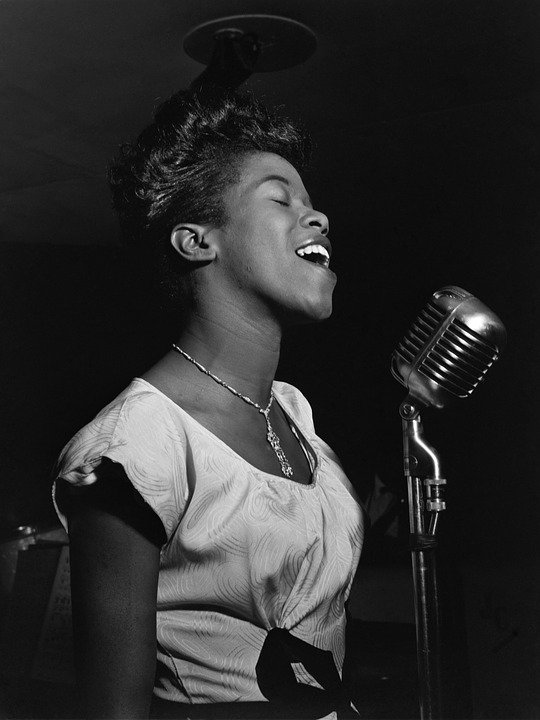 Around this time of year, when spring was emerging from its chrysalis and Gil Noble’s “Like It Is” was part of our Sunday afternoon television fare, the famous vocalist Sarah Lois Vaughan would be among the divas featured on his show. Vaughan died April 3, 1990, but memories of her being escorted by Noble back to her hometown in Newark, N.J. are lasting impressions, as is her remarkable voice, its extraordinary range and her musicality.

To get you in a Vaughan mood as we recount her life, go to YouTube and click on “It Might As Well Be Spring,” which she recorded in 1946 as she was securing her place in the jazz pantheon.

Vaughn was born March 27, 1924 in Newark and was raised in a household where both parents were musicians, although her father earned his living as a carpenter and her mother as a laundress. Her early years were filled with piano and organ lessons, which were first heard publicly in Mount Zion Baptist Church. It was there that her vocals were also beginning to soar above the choir.

But it was her winning performance of “Body and Soul” at the Apollo Theater’s Amateur Night in 1942 that brought her to the attention of singer and future bandleader Billy Eckstine, who persuaded Earl Hines to hire her to sing with his orchestra.

Her stint with Hines ended two years later in 1944, and she then joined Eckstine’s band, where she was pianist and vocalist. This band, including Charlie “Yardbird” Parker and Dizzy Gillespie, has been cited as the cauldron where bebop was born. Bebop’s innovative harmonic colors and tantalizing rhythmic changes were perfectly suited for Vaughan’s interpretations, as is evident in one of her first recordings, “Lover Man,” with the Bird and Diz in 1945.

Having developed her poise and musical skills within an orchestral context, Vaughan was ready to set out on the path that would soon make her among the most requested singers of the era. Listen to her on “If You Could See Me Now,” the Tadd Dameron classic, recorded in the late 40s and early 50s, and it’s easy to see why she was called the “Divine One.” But the nickname “Sassy Sarah” would be a more familiar one to her fans and music lovers.

Whether Sassy or the Divine One, her renditions always brought an intelligent and sensitive interpretation of the lyrics. Many of her loyal supporters swear by her version of “Tenderly” as being her signature song. But each decade seemed to bring a new song that resonated for lovers of Vaughan’s voice.

Ask those who came aboard the Vaughan venture in the mid-50s and they will, without exception, insist that she was never better after “Misty.” Since her first recording of the Errol Garner tune with lyrics by Johnny Burke in 1959, it was among the most requested of songs from her extensive repertoire. And, with so many repeated performances, she began to tamper with the melody and the lyrics, seeking fresh ways to deliver it without losing any of its beauty. One version, which she did with singer and pianist Kirk Stewart in 1963 in Sweden is a marvelous performance in which she extends notes and decorates her impressive vocal range with matchless emotion.

When her recording of “Broken Hearted Melody” climbed on the charts, it was a surprise to listeners more accustomed to her jazzy style, but they, nonetheless, welcomed her reach into the pop market and whatever monetary rewards it brought.

Even so, it was her concert engagements, where she could invest her songs with the typical Vaughan flair, that she relished. Soon, the requests for “Send in the Clowns,” outnumbered all of her other songs, and it was a composition that allowed her to apply the full extent of her musical arsenal.

During some of the engagements, she would accompany herself on piano, as she often did at the beginning of her career. She was particularly adept at the keyboard on the ballads that were at the center of her vast collection of tunes.

Perhaps the most rewarding comments about her vocal abilities were voiced by fellow musicians, many of whom longed for an opportunity to perform with her. A collector’s item is her recording with trumpeter and composer Clifford Brown on “In the Land of Hi Fi.” In that musical invention, her intuitive feel for a tune was never more captivating than her spirited romp on Ray Noble’s “Cherokee.” Her speed and swing equaled Brown’s note for note, and their syncopation was simpatico.

“I don’t think I ever modeled myself after a singer,” she told a reporter. “I’ve more or less copied the styles of horn-tooters right from the start.” That identification with the “horn-tooters” was consistently displayed whether in concert or in the recording studio.

Vaughan’s unlimited versatility surfaced again during the samba or bossa nova craze, and one of the favorites from this period is “Copacabana,” released in 1979. It’s almost possible to envision the blue skies and the beach she invokes about the fascinating environment of Brazil.

For the magic and majesty of her voice and recordings, it wasn’t until 1982, with her recording of “Gershwin Live!,” that she won her first Grammy. Her final concert occurred at the legendary Blue Note club in 1989. A year later, April 3, she died of lung cancer in Hidden Hills, a suburb of Los Angeles. She was 66.

Her many recordings are part of her legacy that also is implanted on the Hollywood Walk of Fame.