Connecticut shoots and defends their way to basketball history 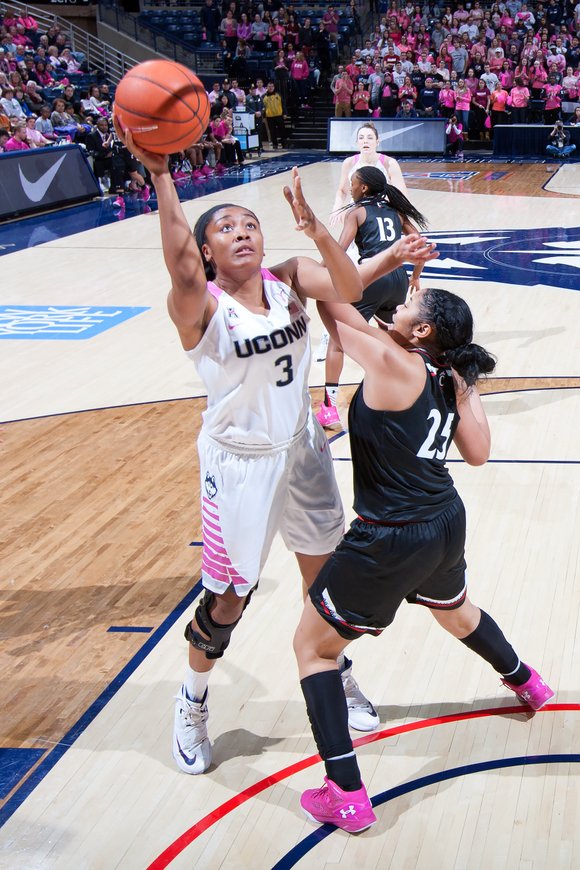 According to some sports pundits, the domination of the University of Connecticut in Division I women’s basketball is bad for the game. There’s no drama if they’re just going to win 75 consecutive games, their current streak, and four straight NCAA Championships. That premise is not only ludicrous but also demeaning and insulting to a brilliant coach, Geno Auriemma, and the extraordinary athletes who have achieved greatness.

Tuesday night, the Huskies won their fourth consecutive national title, the 11th in program history, with an 82-51 victory over the Syracuse University.

Although it is undoubtedly tough to go up against Connecticut, the challenge has caused many programs across the country to step up their games. Look at the teams that joined UConn in the Final Four—Syracuse, University of Washington and Oregon State University—all making first-ever appearances in the Final Four. Syracuse coach Quentin Hillsman spent years battling Auriemma in the Big East, seeing how the best gets it done and becoming one of the best himself.

Those who need more drama in the women’s college game can take heart. The graduations of Breanna Stewart and Moriah Jefferson, likely the top two picks in next week’s WNBA draft, will probably quiet things down a bit. Morgan Tuck may forgo her final year of eligibility to join them. Pundits might have forgotten that Connecticut won three straight NCAA titles when Diana Taurasi was a student and then had a five-year drought from hoisting the trophy.

Connecticut has no unfair advantage. Other colleges and universities have campuses just as nice, great facilities and abundant athletic budgets. What the Huskies have is a culture of winning. With focus and diligent hard work, other programs will do fair and fierce battle. After all, St. John’s University was a little-known program, but in 2012 the Red Storm snapped the Huskies’ 99-game home court winning streak.

We celebrate this historic victory and the amazing players of Connecticut who made it happen. Stewart, Jefferson and Tuck were named to the WBCA Coaches All-America team. The most decorated player in college basketball, Stewart is the first player to receive three Ann Meyers Drysdale National Player of the Year honors. She also won her second Wade Trophy. Jefferson won her second Nancy Lieberman Award for the top point guard in Division I women’s basketball. History is worth savoring, not dismissing.