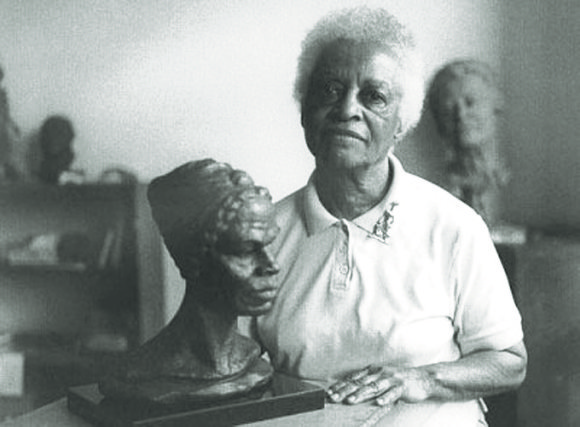 Inge Hardison with one of her sculptures.

It is rather ironic as major league baseball returns and with so much reminiscing about Jackie Robinson breaking the league’s color barrier on April 15, 1947, that Inge Hardison, a sculptor who memorialized Robinson with one of her creations, died March 23 in Manhattan. She was 102.

If you happen to be in Harlem and want to see the bust of Robinson, stop by the Jackie Robinson Recreation Center on Bradhurst near 147th Street. The bronze bust of Robinson was installed there in 1981 and is just one of Hardison’s sculptures of famous personalities and others, who she termed, “Our folks.”

Among “our folks” was the mother and child sculpture that she donated to the Mount Sinai Hospital in New York in 1957. It was her expression of gratitude for the hospital’s help in delivering her daughter.

Born Ruth Inge Hardison in Portsmouth, Va. on Feb. 3, 1914, she was the daughter of William Hardison, a chicken farmer, and the former Evelyn Jordan, a teacher. Her parents found the Jim Crow laws of the South insufferable and moved to Brooklyn, where Hardison was a graduate of Girls High School. She was 22 when she auditioned and won the role of Topsy in “Sweet River,” producer and director George Abbott’s adaptation of “Uncle Tom’s Cabin.”

On Broadway, she appeared in an all-Black production of “Anna Lucasta.” She also had a significant role in “The Country Wife,” starring Ruth Gordon. It was during her performance in “What a Life” that she began killing time between acts by making clay sculptures, even producing several for the cast.

After taking classes at the Art Students League of New York under the tutelage of William Zorach, she made her avocation an occupation, and by the 1960s, she was sculpting a cast-iron collection that she titled “Negro Giants in History.” Included in this esteemed roster were W.E.B. Du Bois, Harriet Tubman, George Washington Carver and Paul Robeson. Another series was devoted to little-known inventors and innovators that she called “Ingenious Americans.”

Some of the works from this series, including one of Dr. Martin Luther King Jr., were part of an exhibition at the Cathedral of St. John Divine in 1988 as a tribute to Dr. King.

It was her creative endeavors that caught the eye of individuals and institutions across the nation, all of them seeking to have pieces of her work as part of their attractions or collections. Her bust of Robinson at the center named after him is indicative of her growing acclaim and recognition. A similarly impressive bust was one of Frederick Douglass that has been on display in the reference room at Princeton University’s Firestone Library since 1983.

“By memorializing such great, selfless people,” she once said, “I have been able to put within the experience of many schoolchildren, college students and adults those much-needed models of inspiration, and many of those who read the biographies of these sculptured heroes are encouraged to try to make their own lives more meaningful.”

This inspiration was what she had in mind with her abstract figure “Jubilee,” on the Medgar Evers College campus in Brooklyn. Her mural of 18 children is on the side of Intermediate School 74 in the Hunts Point section of the Bronx.

As busy as she was versatile, Hardison studied music and creative writing at Vassar College and had several of her poems published in The New York Times. She also attended Tennessee State Agriculture and Industrial College, now Tennessee State University.

In 1969, she was among a number of prominent artists and writers who founded the Black Academy of Arts and Letters.

Along with her daughter, Yolande Hardison, she is survived by a grandson and three great-grandchildren.