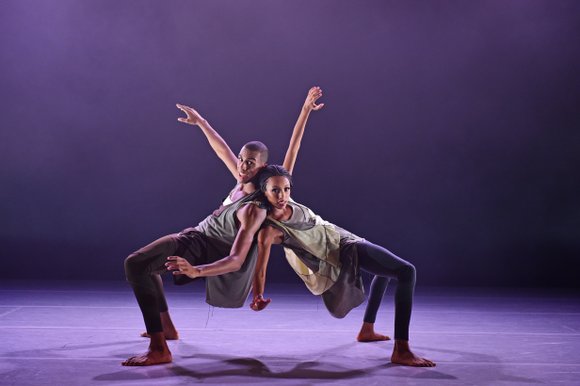 Charged with bringing works by choreographers with seemingly different styles to life, although they try to stay true to the choreographers’ visions, the dancers often outshine the works. The completely dedicated members are Samantha Barriento, Lloyd A. Boyd III, Nathaniel Hunt, Gabriel Hyman, Jacob Lewis, Annellyse Munroe, Jacoby Pruitt, Deidre Rogan, Courtney Ross, Courtney Celeste Spears, Terrell Spence and Terri Ayanna Wright. Rehearsal director Alia Kache brings out the best in them. Watching them move like one in large groups is just one example. And artistic director Troy Powell clearly knows how to pick them.

For his choreographic debut, Jamar Roberts, a member of the main company (Alvin Ailey American Dance Theater) choreographed “Gêmeos” (Portuguese for twins), loosely inspired by his relationship with his brother and danced by Spears and Pruitt. Set to driving beats by Fela Kuti and powered by a playful tongue-in-cheek narrative, although a bit predictable, the fast-paced exchange of one-upmanship moves put Spears and Pruitt in the driver’s seat.

For the full company, there was Jean Emile’s “In & Out,” which offered up angles, canons, deconstructed dance forms (codified and contemporary), some humor and big dancing. More big dancing came from Ray Mercer’s “Something Tangible”—arms and legs fly, turns are followed by spins and more turns, plus a cool section just for the men that shows their ability to execute anything. Kyle “JustSole” Clark’s fragmented “I Am the Road,” intended to bring the street to the stage with his own story, playing with rhythms here and there, perhaps overly dramatic at times, was a light closer, but confirmation of how versatile these dancers are. They mean business.