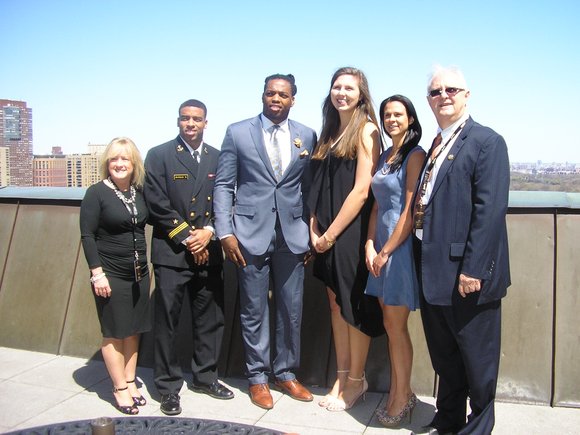 There were firsts at the 86th annual AAU Sullivan Award, which was held at the New York Athletic Club this past Sunday. Despite a multi-tiered selection process, including public and media votes as well as the Sullivan committee and AAU board, for the first time in the award’s history there was a tie. The co-recipients were University of Connecticut basketball star Breanna Stewart and Keenan Reynolds, senior quarterback from the U.S. Naval Academy.

“It’s history for the Naval Academy. We’ve never won this award,” said Vice Admiral Ted Carter. “Think about the great athletes, like David Robinson and Roger Staubach. To have Keenan Reynolds win this is groundbreaking. It speaks to the character of this young man and what he’s done, not just as a leader on the football team, but being ready to serve the nation.”

Although Reynolds’ name is in the mix for the upcoming NFL draft, he is preparing for his first post after graduation in Fort Gordon, Ga, as an information warfare officer. He said balancing the demands of college football with the rigors of attending the Naval Academy took some getting used to, but he feels it has prepared him for life.

“Having that sport aspect is another part of the leadership training,” said Reynolds. “You learn more about the team aspect and the power of teamwork, and you translate that onto your military service. Going out to the fleet and explaining to your sailors how important it is that you work as a team. That’s the reason why I think the Naval Academy, other than from a fitness standpoint, makes you play sports.

“It does definitely allow you to understand the concept of how teamwork can affect production. Being able to go out on the field and compete and win and have success is definitely rewarding.”

“It’s very exciting,” said Sullivan committee chair Melissa Willis, who along with AAU president Dr. Roger Goudy brought Stewart’s trophy to the Connecticut campus Monday. “They’re all such talented athletes. To have the two—Breanna and Keenan—just amazing. Their character, their unselfishness is exceptional.”