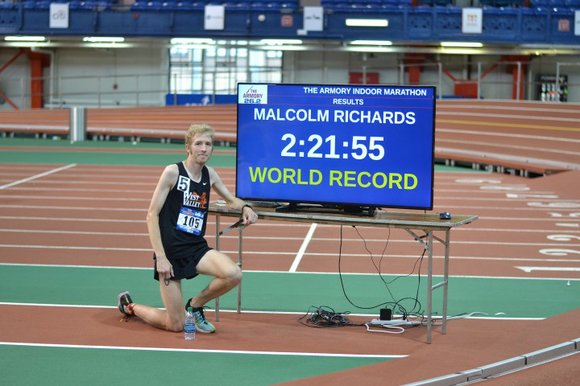 It became apparent both were on pace to become world record holders when each runner reached the 20-mile mark.

“Around mile 16 is where I started feeling pretty good and started picking up the pace a little bit,” said Richards, who competed in the Olympic Trials earlier this year. “I started to gradually pull away. I felt pretty confident at that point, but also just knowing that there are a lot of things [that] can happen when you’re running that many miles and things can turn pretty bad in a hurry. I felt strong enough to where I thought I wouldn’t totally blow up and die.”

“It was really advantageous not having to worry about any kind of weather or any hills,” said Kieffer. “[At the start] I was looking at every single lap to go, ‘This is really terrible and what did I do to myself?’ But once I got into a groove, I felt a lot better and started to get excited during the middle of the race. I got a little too excited and I paid for it at the end.

“I went a lot faster than I thought I would. I was trying to run a 2:50 and not be super close to it where I would feel too much pressure. I ran under 2:45, but I wasn’t going to try to run that fast because it gets harder for next year [breaking the record].”

Richards and Kieffer each received $5,000 for breaking the world indoor record, as well as $1,000 for being the men’s and women’s champion, respectively.

Sunday morning is the final day of the team portion of the Armory NYC Indoor Marathon.

About the Armory Foundation

The Armory is a New York City nonprofit institution, with the mission of “Keeping Kids on Track.” Each season the Armory—the proud home of the NYRR Millrose Games—hosts more than 100 track and field meets and welcomes more than 125,000 athlete visits. Besides its many youth sports and educational programs, the Armory runs the Armory Track Invitational, EmblemHealth Hispanic Games, the New Balance Games and the New Balance Nationals Indoors. The Armory is also the home to the National Track & Field Hall of Fame. The Armory Foundation provides high school and middle school college prep programs to hundreds of underserved New York City school students. In 2015 more than 91 percent of Armory college prep seniors were accepted into four-year colleges and were awarded $2.2 million of financial aid. For more information, please visit ArmoryTrack.com.