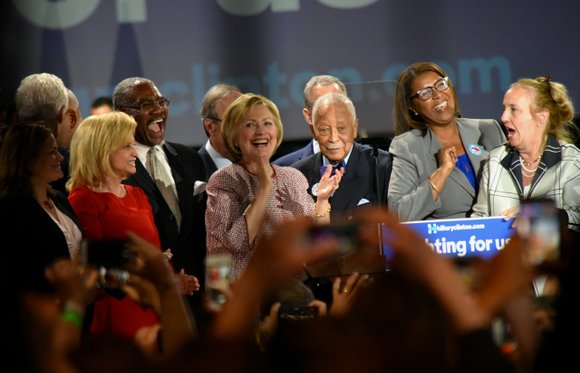 “There’s no place like home,” said Hillary Clinton during her victory speech at the Sheraton Tuesday night. After stating her wins all over the nation, she observed, “but this one is personal.”

It was personal because for two terms she was the state’s senator and she was expected to win.

And win she did, but by a margin that may have surprised her campaign team, garnering more than a million votes and defeating Sen. Bernie Sanders by 15 to 16 percent, depending on the source.

She said she had more votes, 10 million, than all the other campaigns, Democrat or Republican. “As we head into the homestretch,” she told the crowded ballroom, “victory is in sight.”

The victory line became even closer as she received 139 delegates in New York to add to her total of 1890 compared with Sanders’ 1190. She needs only a little more than 400 to reach 2383 and the nomination in July in Philadelphia.

Speaking from his hometown in Burlington, Vt., Sanders said, “While I congratulate Secretary Clinton, I must say that I am really concerned about the conduct of the voting process in New York State, and I hope that that process will change in the future.”

Exactly what problem he was complaining about wasn’t clear, although he could have been referring to the debacle in Brooklyn, where some 125,000 people were removed from the rolls. Or he could have been expressing his dismay about the closed elections that kept independents from voting, thereby depriving him of their usual votes.

According to his campaign team, including Jeff Weaver, there is still a “path to victory,” although that path just got a bit more challenging after the New York primary. And it may be even rougher after Pennsylvania, New Jersey and Maryland, where the polls show Clinton with single- to double-digit leads.

In her victory speech, Clinton had a line or two for Sanders, noting that “we have more things that unite us than divide us.” And that unity will be very important in the general election, with Donald Trump winning New York and increasingly assuring his nomination in Cleveland.

According to the exit polls, Clinton won 67 percent of the Black vote, and swept practically every category, except voters 18 to 29. Those voters will be absolutely critical in the general election, and it would to the detriment of the Democratic Party if those voters decided to stay home rather than vote for Clinton.

“We don’t have much of a race anymore,” Trump told his supporters gathered at his tower in midtown Manhattan. “We’re going to go into the convention I think as the winner.”

That convention is on tap to be a contested one, which would benefit the Democrats who have, via the DNC, already begun laying the foundation for the general election with the procurement of media ad space in the key swing states.

“Donald Trump and Ted Cruz are pushing a vision for America that’s divisive and frankly dangerous,” Clinton added during her victory speech. “We have a very different vision. It’s about lifting each other up, not tearing each other down. Instead of building walls, we are going to break down barriers.”

One of those barriers will fall if Sanders keeps his promise to support Clinton if she’s the nominee. Thus far, there are few signs that he will stem his aggressive fight for the nomination or help the party in raising funds for that future battle.