Prince death: Get up to speed on the latest developments 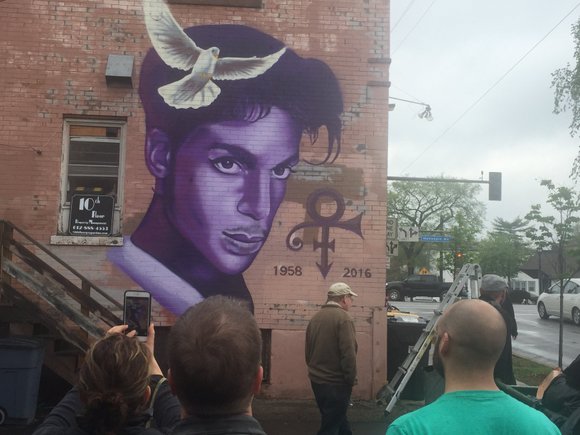 A mural painted celebrating Prince's life in the Uptown neighborhood he made famous singing about. CNN photo

Mourners from the singer's inner circle and fans from far and wide are remembering him four days after the 57-year-old musician was found dead inside an elevator at his Paisley Park Studios. His death Thursday came about a week after his private plane made an emergency landing in Illinois. More details about that incident were obtained by CNN on Monday.

Hours after what turned out to be his final concert, Prince was returning home from Atlanta on his private plane when the pilot made an emergency landing in Illinois at the Quad City International Airport early on April 15. Communications released Monday by the FAA said the emergency stop was due to an "unresponsive" male passenger aboard, according to communication released Monday to CNN from the Federal Aviation Administration.

The singer was reportedly rushed to a hospital in Moline. His publicist, Yvette Noel-Schure, later said he had since returned home and was fine.

Noel-Schure announced Saturday that his remains had been cremated. A small group of Prince's "most beloved" said goodbye "in a private, beautiful ceremony."

"An announcement will be made at a future date for a musical celebration," she said.

What caused the pop superstar's death? It could be weeks before we know, according to his publicist and authorities. "The cause of death remains unknown," Noel-Schure said, "and it will be at least four weeks before we receive the results of the autopsy."

Fans brought flowers, balloons and signs to leave in front of the Paisley Park complex over the weekend. And some of them left with mementos of their own. Some of Prince's family and friends gave out at least 15 round purple boxes containing Prince memorabilia like CDs, T-shirts and books to fans gathered there Saturday.

Thousands made pilgrimages to downtown Minneapolis, standing outside the First Avenue & 7th St. Entry club with boom boxes blasting his songs and placing purple flowers in front of the wall where his name is emblazoned. They remembered him as not only a pioneer of a distinct synth-pop and funk style known as "Minneapolis sound" but as heir to a diverse musical family of great artists like Joni Mitchell and Sly and the Family Stone.

Officials at the University of Minnesota are weighing whether to award Prince an honorary doctorate -- something they were considering before the musician's death. The university's president told CNN Sunday that the nomination will likely be approved by an honors committee and then go to the university's board of regents and president in June for the final say.

Back on the big screen

Prince's cult classic "Purple Rain" returned to movie theaters over the weekend for a limited run. Tickets sold out in hours for the limited release, and fans sang and danced along with the film as they remembered the pop icon. During its first stint on the big screen in 1984, the movie made nearly $70 million and garnered Prince an Oscar win for Best Original Song.

A chorus of praise

Since the pop star's death Thursday, the chorus of praise from fans, friends and protegees of the late musician hasn't stopped. Over the weekend, gospel legend Bebe Winans, James Brown's daughters and Minnesota Lynx player Renee Montgomery, and KISS bassist Gene Simmons were the latest to share their memories with CNN.

Prince worked hard to maintain his privacy, no small feat in the age of celebrity gossip and the Internet. "Having crafted a musical empire, taken on his industry to fight for the rights of artists and survived with a career artists half his age would have envied, Prince was careful and built his inner circle almost as meticulously as he did his compositions," CNN's Lisa France reports.

One issue that many media outlets struggled with while covering Prince's death: TMZ was the first to report it. That meant most news organizations held off at first, afraid to follow the gossip site's lead. Is that approach outdated now? CNN's Brian Stelter discussed that question with guests Sunday on "Reliable Sources."