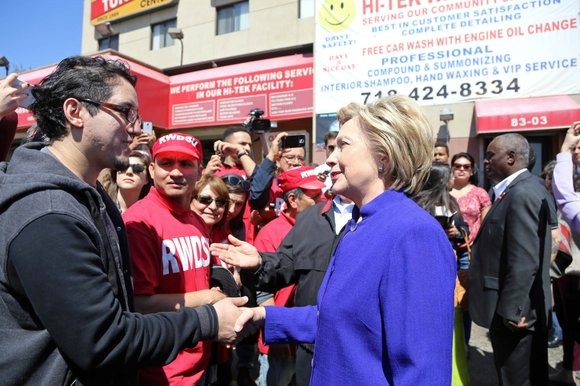 Earlier this year, 50 workers at SLS Car Wash in Brooklyn, New York, overwhelmingly voted to join the Retail, Wholesale and Department Store Union. They did it for the same reasons workers at 10 other New York City car washes have done it since 2012—to win respect at work, to win better pay and benefits and to prove that there is dignity in low-wage work. They’ve proved that car wash jobs can be a stepping stone to a better life and not just a sentence to a life of poverty.

Car wash workers, like other low-wage workers across the country, have had enough of illegally low pay and having their voices—and their rights—ignored. They are calling attention to the difference unions can make in workers’ lives and the fact that employers can afford to do right by their workers.

Workers at nine New York City car washes have won contracts bringing them better pay, better benefits, better health and safety protections, paid time off and control over scheduling that had never before been a part of their jobs. The largely immigrant workforce has won the right to return to their home countries and have their jobs waiting for them when they return.

They’ve shown that a union voice isn’t all about money. It’s about dignity, respect and fighting for the things that are important for each group of workers.

The day before the New York Democratic primary, presidential candidate Hillary Clinton came to Hi-Tek Car Wash in Queens, N.Y., to talk with workers. The workers at Hi-Tek started it all as the first “carwasheros” east of Los Angeles to win a union election. Clinton’s campaign is focused on fighting for marginalized people in our society—including low-paid workers—and creating a better America with an economy that works for all of us. Car wash workers epitomize this part of her campaign, and Clinton was there to talk with this group of immigrant workers and hear firsthand the story of how they changed their own lives.

We see it all around us, throughout our union. We see it in New York City’s car washes, and we see it across the river in New Jersey, where newly organized workers at Laminated Paper won a short strike in April when the owner agreed to the RWDSU Local 262 members’ terms.

Workers are showing that when they stand together and form a collective voice, they can build stronger lives for themselves and their families.