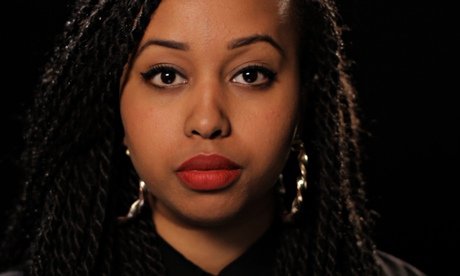 Beyonce’s pick for lyrics for her latest production, “Lemonade,” was Warsan Shire, a poet of Somali-British parentage.

A 27-year-old born in Kenya to Somali parents, who published her first pamphlet, “Teaching My Mother How to Give Birth” in 2011, Shire went on to win the inaugural Brunel University African Poetry Prize in 2013.

“I tried to change/Closed my mouth more/Tried to be softer, prettier—less awake,” uttered as Beyoncé spins under water, her eyes open as if in a trance, is adapted from “For Women Who Are Difficult to Love.”

Warsan Shire’s debut collection is due to be published this year.

Other Shire poems are “The Unbearable Weight of Staying (the End of the Relationship),” and “Nail Technician As Palm Reader.” All serve as interludes between songs. In the production credits for “Lemonade,” Warsan Shire is noted as having worked on “Film Adaptation and Poetry.”

“Shire conjures up a new language for belonging and displacement,” wrote Alexis Okeowo in The New Yorker magazine. “What she has described, in an interview, as the ‘surrealism of everyday immigrant life—one day you are in your country, having fun, drinking mango juice, and the next day you are in the Underground in London and your children are speaking to you in a language you don’t understand.’

“Her poetry evokes longing for home, a place to call home, and is often nostalgic for memories not her own, but for those of her parents, grandparents, uncles and aunts, people who forged her idea of her ancestral homeland through their own stories.

“With fifty thousand Twitter followers and a similar number of Tumblr readers, Shire, more than most today, demonstrates the writing life of a young, prolific poet whose poetry or poem-like offhand thoughts will surface in one of your social media feeds and often be exactly what you needed to read, or what you didn’t know that you needed to read, at that moment.”