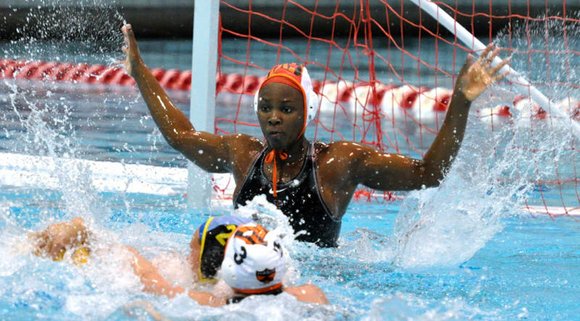 Hillary Clinton made history when she became the first woman to accept a nomination for president of the United States for a major political party. Now Ashleigh Johnson is another American woman poised to make history.

The daughter of Jamaican parents, Johnson, the goalie for the United States women’s water polo team, will become the first Black women to represent this country in the sport when she participates in the Rio Olympics, which will hold its opening ceremonies tomorrow (Friday).

The 21-year-old from Miami will be charged with helping the U.S. defend its gold medal from the 2012 London Olympics. Last summer, the 6-foot-1 Princeton University student-athlete anchored the United States gold medal-winning effort at the Aquatic World Championships in Kazan, Russia, earning the Gold Medal Match MVP award, as well as World Championship Top Goalkeeper honors.

Most sports fans rarely, if ever, watch water polo. It is considered an obscure discipline in which few Black men and women participate, especially on an elite level. The state of California, principally Southern California, is the primary breeding ground for top talent. In fact, Johnson, who is from Miami, is the only non-California player on the women’s Olympic team roster.

Whereas megastars such as Usain Bolt (track and field), Michael Phelps (swimming) and Carmelo Anthony (basketball) are global icons, engaging in events at the Olympics that will be prominently broadcast during peak viewing hours, Johnson remains essentially unknown, despite being one of the world’s most gifted athletes.

Her pathway to water polo was taking swimming lessons as a young girl, along with her sister and three brothers—she is the oldest—initiated by her mother, Donna Johnson, a nurse and single mother. Ashleigh subsequently evolved into Florida’s most dominant goalie at Ransom Everglades High School and was recruited by the nation’s most successful college programs.

Instead of choosing UCLA, Stanford or USC, the three programs that have collectively won every NCAA title since 2001, Johnson opted to attend Princeton. A year later, she was joined by sister Chelsea, a rising junior on Princeton’s women’s water polo team and a two-time high school All-American at Ranson Everglades.

“I think Ashleigh Johnson’s the future of our sport in the U.S.,” Christopher Ramsey, the CEO of USA Water Polo, said to the Associated Press in an interview in late May. “She’s an out-of-California athlete who grew up in Florida. She went to Princeton, high academic achiever from a different background than a lot of traditional water polo families are from.”

Without a lot of publicity, she’ll be one of the brightest stars for U.S. in Rio.