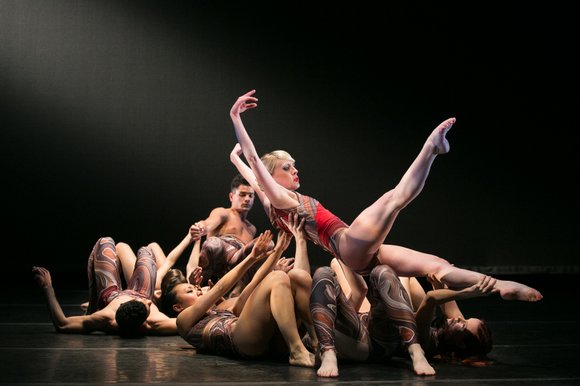 For August, dance can be seen indoors, and although there is more summer to be had, a good deal of outdoor performances are happening this month. For their inaugural New York City season, the American Dance Festival will present works by Russian choreographer Tatiana Baganova’s Provincial Dances Theatre and Miami-based Rosie Herrera Dance Theatre at the Joyce Theater, Aug. 1 to Aug. 6. On the program is Herrera’s “Various Stages of Drowning,” first staged for ADF students in 2009. For the Joyce season, this “… campy and poignant … [blend of] dance, theater, cabaret, and film,” now titled, “Various Stages of Drowning: A Cabaret,” is remounted for the company. Also on the program and commissioned by ADF is Herrera’s “Carne Viva,” “…a quartet exploring what it means to believe in magic and how that bleeds into our constructions of spirituality and our understanding of romance,” notes the release. Rounding out this inaugural season is Baganova’s “Sepia” (2010), originally commissioned for ADF students, and “Maple Garden” (1999). For more information, visit www.joyce.org.

Aug. 8—At The Yard on Martha’s Vineyard, co-presented with the Martha’s Vineyard African-American Film Festival, Reggie Wilson/Fist and Heel Performance Group will present “Citizen,” a “…multidisciplinary work [that] wrestles with the many implicit and explicit challenges, struggles, judgments and webbing that exists between the anonymity of the individual and the experiences of being a citizen of one’s homeland or one’s adopted homeland,” according to the release. For more information, visit www.dancetheyard.org,

Aug. 12-28—The New York International Fringe Festival returns for the 20th year with programming of nearly 200 emerging theater and dance companies, including Alia Kache/Kachal Dance (Aug. 12-26) in “Caricature of She,” which “…explore femininity through a whimsical fusion of dance and theatre,” and colectivodoszeta/carlos a. cruz velázquez (Aug. 13-24), in “auto/PHOBIA,” which “… looks to transform loneliness and at how the self adapts to its ever-present specter,” notes the release. For more information, visit www.fringenyc.org.