‘Star Trek’ is back with ‘Beyond’ 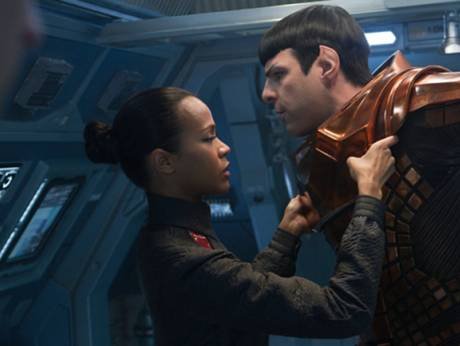 Time stops for no one, even in space. In reviewing the Captain’s Log, with a birthday approaching, Captain James Tiberius Kirk, finds himself deeply depressed. Actor Chris Pine, who took over the iconic character originated by William Shatner, is now on his third voyage. The franchise has been going on adventures for half a century, which speaks to a global audiences’ desire to “go where no man has gone before.”

Directed by the action maven Justin Lin from a script by Simon Pegg and Doug Jung, this installment goes further, begging the question, “What more is out there?” and then proceeds to answer that question cinematically.

Lin brings back the gang, which includes Kirk wrestling with his advancing age and in the middle of an existential career crisis. Spock (Zachary Quinto) and Uhura (Zoe Saldana) are back but there is trouble in paradise, and they are experiencing some bumps in their love life.

Keeping it light, Bones (Karl Urban) is back and as cantankerous as ever. Chekov (Anton Yelchin) Sulu (John Cho) and Scotty (Mr. Pegg) provide complicated technical support and additional comic relief. A special nod to Yelchin’s dynamic performance, which seems especially poignant after his death by a freak accident this year. The film is dedicated to his memory as well as the memory of Leonard Nimoy, the original Mr. Spock, who died in 2015.

On the surface of a distant planet, the crew encounters old adversaries and new allies. On the evil side is a murderous warlord named Krall (a masked Idris Elba). The spirited sidekick is a stranded fighter named Jaylah (Sofia Boutella in zebra-stripe makeup).

There are so many twists and turns to share, but any more would be spoiling the entire movie plot. In summary, everything that could go wrong, goes wrong and yet, using imaginary science to explain the “why” of it, everything is resolved with breathless urgency and just in the nick of time.

In this installment, there is balance, inventiveness and a strange familiarity. The characters, blissfully, never change, although the rising stakes shift wildly from one adventure to the next. Die-hard fans of “Star Trek” will appreciate the episodic feeling, and to keep it exciting, again, the future of the universe hangs precariously in balance.

Action lovers will be smiling throughout because it follows the successful template and “Beyond” brings the climactic sequences that involve explosive destruction and a brutal hand-to-hand fight between the main villain and the stoic good guy.

Do “go where no man has gone before.” There is bounty to be found in “Star Trek Beyond.”