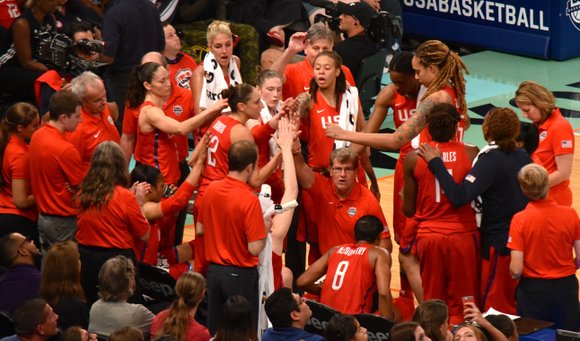 U.S. Olympic women’s basketball team coach Geno Auriemma said when he was planning the team’s exhibition schedule, he knew he wanted to end at Madison Square Garden. The team did just that, winning a hard-fought, physical game 104-89 against its strongest rival, Australia, before an enthusiastic crowd of 13,520.

“USA Basketball, people from the Garden, the New York Liberty, they did a great job arranging this,” said Auriemma. “This is where I wanted the USA women’s national team to have their last appearance in the United States because there’s no other place like here.”

With dominant, world-renowned players such as Sue Bird, Diana Taurasi, Sylvia Fowles and Maya Moore, people assume the team will cruise to gold at the Olympics. Auriemma said teams such as Australia, France and Spain can challenge the U.S. team, and every player must be mentally and physically prepared.

“You try to tell everybody that winning a gold medal is not easy,” said Auriemma. “Throughout [today’s] game, I thought we were great in responding to various things. We did a lot of good things today.”

He added,“We have things we have to work on. We will. We’ve got a lot of pieces to work with.”

The depth of the U.S. team is its strongest asset. Players who are stars on their WNBA or international teams gladly accept being role players on the U.S. national team. There seem to be solutions for virtually every problem that can arise, and when the starters on other teams may tire, the U.S. team has a deep and ready bench.

“When you play on the Olympic team, you end up doing things that make you feel like ‘I’m contributing something to the team,’” Auriemma said. “It could be points, it could be rebounds, it could be playing great defense, assists. … I just want everybody on this team to feel like, ‘I know what I did to get me on this team and I’m going to try to do that every night.’”