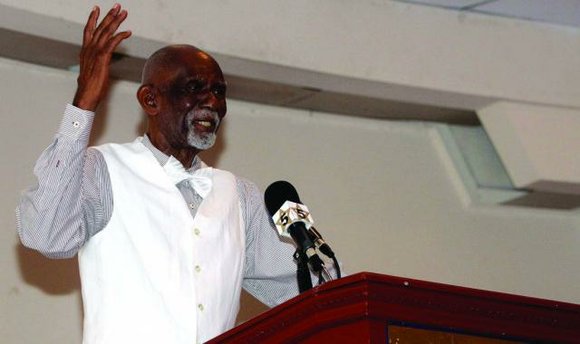 Tributes and accolades came in thick and fast when news broke Saturday evening that the renowned herbalist, alternative medicine practitioner and healer, Dr. Sebi, had made his transition Aug. 6. Accompanying the initial shock of his death were waves of speculation about the circumstance of his death.

“Dr. Sebi was an inspiration to many,” cultural activist Camille Yarbrough told the Amsterdam News. Noting how so many cultural icons in the Black community give so much, and yet do not always enjoy the same support network they help create for others, the dancer, author and beloved cultural figure in her own right, Yarborough said of Dr. Sebi’s life, commitment, gifts and teachings, “We give thanks.”

Sunday, Aug. 7, 2016, Beverly Oliver of SoJourn to Honduras SoJourn to Healing was one of many people who contacted the AmNews by email, phone and social media.

“We are saddened to let you know Dr. Sebi has passed away in Honduras, Central America,” Oliver wrote. “His daughter, Saama Bowman, informed the public via Instagram yesterday, August 6, 2016. She made the announcement from Honduras.”

With her own tag line “WhyAn (SIC) Herbalist’s View Matters More Today Than Ever Before,” Oliver stated, “Dr. Sebi, owner and founder of Los Angeles-based company Dr. Sebi’s Office, Inc., has died in Honduras, Central America. The daughter of the pathologist and herbal medicine specialist, Saama Bowman announced his passing on Instagram yesterday, Saturday, August 6. It is reported Dr. Sebi had been in jail in Roatan, Honduras when he became ill and was taken to a hospital in Roatan.”

When Dr. Sebi first came to America, he was told that he had asthma and diabetes, among other ailments. Despite visiting several medical doctors, he said he was not getting better until he went to see a herbalist in Mexico, who cured him. Clean, natural foods, natural plant-based compounds and herbs, he maintained for years was the solution to a healthy cellular structure and a disease-free life.

Dr. Sebi is known for proclaiming that mucus excess is the cause for many many ailments. “According to Western medical research, diseases are a result of the host being infected with a ‘germ, virus or bacteria.’ And, in their approach in treating these ‘infestations,’ inorganic, carcinogenic chemicals are employed. But by consistently utilizing the same premise and methods, they have consistently yielded ineffective results. In essence, in the 400-year tradition of the European philosophy of medicine, their approach in treating disease has yet to produce any cures. In contrast, our research refutes the germ/virus/bacteria premise.

“The USHA Research Institute reveals that all manifestation of disease finds its genesis when and where the mucous membrane has been compromised. For example, if there is excess mucous in the bronchial tubes, the disease is bronchitis; if it is in the lungs, the disease is pneumonia; in the pancreatic duct, it is diabetes; in the joints, Arthritis.”

In 1985, with a Brooklyn office, Dr. Sebi ran an ad in the Amsterdam News and other local papers declaring, “Aids has been cured by the USHA Research Institute, and we specialize in cures for sickle cell, lupus, blindness, herpes, cancer and others.”

After a couple of years of this ad running, New York Attorney General Robert Abrams had Dr. Sebi arrested, charged and reportedly determined that he would “put Dr. Sebi under the jail!”

Dr. Sebi was charged as follows: “Mr. Alfred Bowman aka Dr. Sebi, you are hereby charged with practicing medicine without a license, selling products not approved by the FDA (Federal Drug Administration) and claiming to cure Aids, and other diseases, which is a fraudulent claim.”

Although Dr. was told to bring one cured person to prove each of his claims, he presented approximately 70 people to the court. The case went through the usual legal machinations, but ultimately Dr. Sebi was found not guilty of all charges by a jury.

It is this history, plus Dr. Sebi’s decades of servicing hundreds if not thousands of people all over the world, that is leading people to question the nature of his death.

Confusion reigned initially. Social media and traditional communication was heavy with questions as to the validity of the news as it broke Saturday evening.

This weekend, the USHA Research Institute, Dr. Sebi LLC, and the Usha Healing Village located in Laceiba, Honduras, said, “He became sick with pneumonia while being held in prison. His condition escalated quickly and he was transferred to a nearby hospital. We are unsure about what type of treatment he received over the course of the last few days, both before and after being submitted to the hospital.”

Sources close to his own organizations stated that on May 28 Dr. Sebi and an associate, Pablo Medina Gamboa, were detained at Juan Manuel Galvez de Roatán Airport on Roatán, an island off the coast of Honduras. In possession reportedly of $20,000 and $30,000, they were arrested and charged with money laundering. They were released and given a June 3, 2016 court date.

On that date the Public Ministerio detained Dr. Sebi. He became ill incarcerated, supposedly with pneumonia-like symptoms, and reports state that he died on the way to the Vicente D’antoni Hospital.

Nadra Rae owner and operator of Holistic Heights said, “Dr. Sebi taught me the value of the African Bio Mineral Balance … I would like to personally send my love and condolences to his loved ones. I know that we all go through ups and downs with family members, but what you ALL have done for the world surpasses all of that. I have been EXTREMELY BLESSED to have been in the presence of greatness that will go down in history and I am eternally grateful for ALL of you helping me to heal my son.”

Dave Thomas III stated on Facebook, “This is why such a wonderful soul as the Dr. Sebi was MURDERED. He planned to take his healing to the world. The big pharmas would NOT ever let that happen.”

“Dr. Sebi brought us natural healing through water, herbs and exercise, that remains a threat to the monopolies of the capitalistic health-care system, pharmaceuticals and insurance companies,” said Assemblyman Charles Barron. “He would cut into their greedy profits. We must always stay vigilant and question everything.”

“I knew Dr. Sebi for 40 years, and he was a man who was the same last week as he was four decades ago,” Professor James Small told the Amsterdam News. “He was a great traditional healer with unwavering political integrity. He was one of the greatest examples of a dedicated hero, who has been amongst us—he was a temple, a university of medicine—and a library of the herbal healing sciences. He has done great work and the ancestors will receive him well. I accept that he has passed on to the ancestral realm, and he deserves the right to to be looked upon as a revered ancestor.”