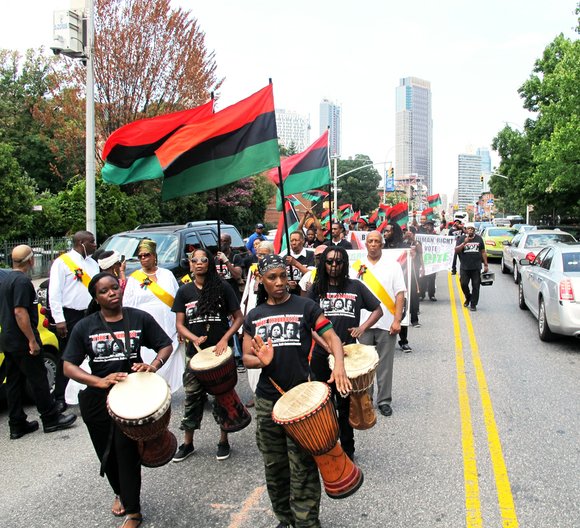 The spirit of the Hon. Marcus Mosiah Garvey Jr. illuminated the streets of Brooklyn Saturday afternoon, Aug. 6, 2016. Despite cloudy skies and predictions of storms, the Choice Campaign organizers, led by the December 12th Movement, went about their work and kicked off Marcus Garvey month, celebrating the 129th anniversary of his birth, with a march and rally in his honor under the banner of self-determination, reparations and a plebiscite.

As people began to assemble in Cuyler Gore Park on Fulton Street and Green Avenue at noon, the clouds cleared and the sun shined through. Santina Payton, a veteran Brooklyn activist, began the commemoration by pouring a libation to pay homage to Marcus Garvey and all of our African ancestors who sacrificed their lives in the fight for our liberation.

The march traveled through the streets arousing people with slogans promoting “Black Power and Unity,” daring everyone to fight against racism and for self-determination, chanting “Garvey was right! Stand and fight.” People on the sidewalk stopped, raised their fist and joined the chants, many joining the procession as it marched from Green Avenue in Fort Green to Fulton Park in Bedford-Stuyvesant shouting Garvey’s words: “Up you mighty race! You can accomplish what you will!”

The rally at Fulton Park was opened by Plummer. “In the 1920s, Marcus Garvey, without any cell phones, texts, internet, or social media, organized African people on three continents!” she declared. “His leadership on the question of self-determination continues today. As we examine our conditions here in the U.S., we must continue Garvey’s work. Our communities are being gentrified, affordable housing is scarce, police are brutalizing and murdering us with impunity, failing educational institutions, mass incarceration, and the state’s systemic racism reign supreme.”

She continued, “We have got to make our own choices, in our own interests. We can begin with the upcoming presidential election on Nov. 8, 2016. Neither Hillary Clinton nor Donald Trump operate in our interest.

“Clinton has a long history of exploiting and oppressing African people; not only in the U.S. with her ‘super predator’ policy criminalizing Black men, but also the Clinton Foundation’s leadership in the gross exploitation of the Haiti earthquake relief funds, her collusion in the assassination of Libyan President Muammar Gaddafi and sponsorship of the crippling economic sanctions in Zimbabwe. We do not have any illusions.”

Plummer quoted W.E.B. Dubois, in his “Why I Won’t Vote” statement of 1956: “I believe the democracy has so far disappeared in the U.S., that no “two evils” exist. There is but one evil party with two names, and it will be elected despite all I can do or say.”

Lastly, Plummer said, “The Choice Campaign is proffering a write-in “Reparations Now!” vote on the presidential line of the General Election for 2016. Building towards a plebiscite, an international referendum vote for Black people in the U.S. We have never had the opportunity to choose our own destiny here in the U.S. A plebiscite can be used to decide, amongst ourselves, which way forward in the 21st century.”