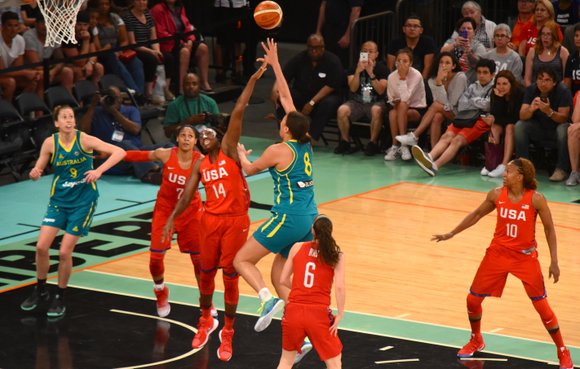 As expected, the U.S. Olympic Women’s Basketball Team dominated its opening games in Rio. Sunday, the U.S. team won a historic victory over Senegal 121–56. It was the largest number of points and largest margin of victory for any team in U.S. women’s Olympic history. Seven U.S. players scored in double figures, including Olympic newbies Brittney Griner with 14 points, Elena Delle Donne with 11 and Breanna Stewart with 15.

“The three of them played as if they were Olympic veterans,” said Head Coach Geno Auriemma. “It didn’t look like there was any sign of nervousness, or tentativeness or deferring to the other players.”

Fourth-time Olympian Sue Bird, a Long Island native and graduate of Christ the King High School in Queens, said the players are using these early games to work on playing their best together. While records are nice, this team’s goal is to win a sixth consecutive gold medal.

Just like in the WNBA, sometimes there are back-to-back games in Olympic play, and on Monday the U.S. team defeated Spain 103-63. The margin of victory was somewhat surprising, given that Spain won the silver medal at the last World Championships, but without Sancho Lyttle, the team lacks offensive punch. Scoring more than 100 points in consecutive games hasn’t been done in three Olympics.

“It would probably be our depth that’s making that happen,” said Bird. “A lot of Olympic teams that I’ve been on have had offensive power, but now we go all the way down to the 12th player and the minute you sub there’s no let off. That person who comes in can do just as much offensively as the next.”

She added, “We’re trying to get better with every single game and you can’t relax.”

Preliminary round play continues. Friday, team USA takes on Canada, and then China Sunday. The medal round begins next Tuesday.

In other Olympic action, gymnast Simone Biles delivered on the hype, dominating the preliminary round, giving the U.S. women’s gymnastics team a substantial lead heading into the team final. She also qualified for the all-around and three individual event finals. Defending all-around gold medalist Gabby Douglas did not qualify for the all-round—each country can only enter two gymnasts in the all-around—but will go for her first event gold medal in the uneven bars.