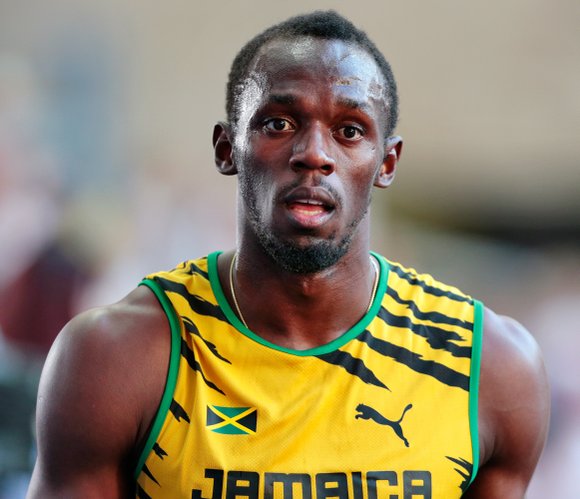 RIO DE JANEIRO (CNN) -- It's become the sporting spectacle of the 21st century -- Usain Bolt arrives at an Olympic Games and walks away with the 100-meter gold medal.

While his days of breaking world records over the distance might have passed, he's still able to deliver on the biggest stage.

And although it was the slowest time with which Bolt has won a major championship, it was enough to satisfy a crowd who chanted his name from the second he appeared on the big screen through to the moment he paraded the track draped in the Jamaican flag.

With fears over security and empty seats threatening to overshadow Rio 2016, he provided the good-news story everybody craved, crossing the line in 9.81 seconds to fend off the challenge of rival Justin Gatlin in Sunday's final.

And while Bolt was saluted as hero, Gatlin was cast in the role of pantomime villain.

Few Olympians will have experienced a welcome as hostile as the one afforded to the American. A divisive figure in track and field having twice served doping bans, he was booed at every turn.

Twelve years after he claimed 100m gold at Athens 2004, Gatlin was unable to dethrone Bolt as the Olympic sprint king.

Instead, as Galin tied up in the races closing quarter, he was forced to watch on as Bolt coasted towards the finish line and into the record books.

Coupled with the scenes of wild celebration was an overwhelming sense of relief. Rio's Games had avoided the awkward prospect of the winner of its blue riband event being booed on the podium.

The Olympic movement, it seems, can always rely on Bolt when it needs him the most.

He added to his already gilded legacy by becoming the first athlete to win the 100-meters at three different Games. He's now the overwhelming favorite to compete a "triple-triple" by adding the 200-meter and 4 x 100-meter titles to his collection.

"Somebody said I can become immortal," Bolt said moments after his triumph, as the sounds of Bob Marley reverberated around the Olympic Stadium. "Two more medals to go and I can sign off. Immortal."

Bolt, meanwhile, was left unimpressed by the reception afforded to Gatlin.

"That's the first time I've gone into a stadium and they've started to boo," the 29-year-old admitted. "It surprised me."

Appearing at his fourth Olympics, Gatlin picked up a fifth medal -- albeit not the one he had hoped for.

And despite a less-than-warm welcome from the crowd, Gatlin wasn't holding any grudges, instead choosing to focus on the support he received from Americans inside the stadium.

"At the end of the day you hear everything, but you have to tune that kind of stuff out," admitted Gatlin.

"They are excited, I understand that. There are a lot Usain Bolt fans, there are a lot of Jamaican fans but they don`t know me, they don't know Justin. I have worked very hard.