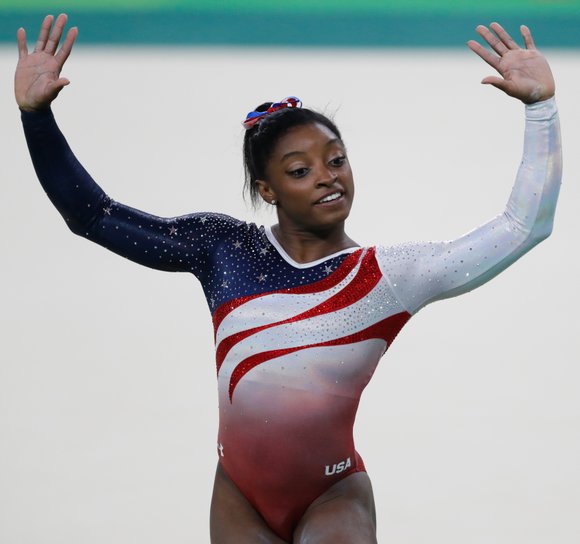 (CNN) -- For anyone who doubted her, it's official: US Olympic gymnast Simone Biles is #1.

The 19-year-old powerhouse proved her dominance in the sport on Tuesday with a practically flawless floor routine that won her a fourth gold medal in Rio.

Teammate Aly Raisman, the reigning Olympic champion on the floor, took second place with a score of 15.500, making it the second 1-2 win for the two American gymnasts this Olympics.

Biles scored a 15.966 in the floor exercise final with a series of difficult moves executed to near-perfection, including the signature move named for her.

The Biles is a double layout with a half-twist and a blind landing. She performed the move, ending it with a stag leap that she had left out of her team performance but added back for the individual all-around.

Not that anyone really expected less from Biles, who went into Rio favored to take home gold in the event and win big all around. And, deliver on those expectations, she did.

The win makes Biles the first woman to win four gymnastics golds in a single Olympic Games since Romania's Ecaterina Szabo in 1984. She leaves these Olympics as the most decorated gymnast with four golds and a bronze.

No gymnast has won five medals at an Olympics since Nastia Liukin in 2008.

Her push for five golds was thwarted Monday when she had a misstep on the balance beam, taking home the bronze medal behind teammate Laurie Hernandez's silver.